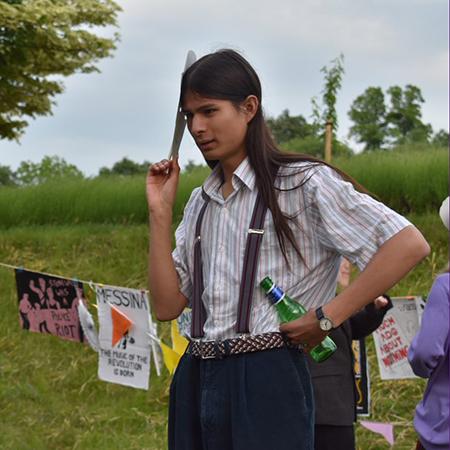 After Covid restrictions were eased in Michaelmas, Oxford drama bounced back… and with it, the Merton Floats. The Floats acts in two main areas: as a funding body, and as a production company. Determined to facilitate student theatre and not let money get in the way, this academic year we have funded seven student productions at the Oxford Playhouse, the Burton Taylor Studio and the Michael Pilch Studio, and are currently funding Fringe shows and short films. These productions have ranged from original to well-established musicals, from Shakespeare to exciting new writing.

January 2022 saw the formation of the new committee, with Anna Stephen as President, Aryaman Gupta as Secretary, and Sebastian Dows-Miller continuing as Treasurer. Our first priority was to organise the summer garden play, a tradition the Floats had not revived since 2018. As early as February, we were taking pictures of the lawn and brainstorming the works of Shakespeare, Wilde and Noël Coward. A quick vote on the OUDS Facebook page confirmed our choice: Shakespeare’s much-loved Much Ado About Nothing.

We set the play in the late 1960s, in the heat of student counterculture and anti-war protests. With a main set structure of a ‘washing line’ decorated with hand-painted protest posters, an entrance on bikes to Thin Lizzy’s The Boys are Back in Town, and a megaphone with a very loud siren, the play was a fantastic success. Several days threatened rain, but luck was on our side and the sky cleared up in time for all five shows to take place outside. We received excellent feedback and turned an impressive profit, which we will use to fund Merton and university-wide drama.

We would like to thank the Merton Floats, Kelly Calvert and the Events team, Huw James and the Porters, Jane Reid and Khristopher Watts, and Lucille Savin. I am very excited for the future of the Floats in the next academic year.