The Roger Bacon Society is made up of all those involved with physics at Merton College. The three key events that are held during the academic year are the Freshers’ Tea, the Society Dinner and the Summer Garden Party. 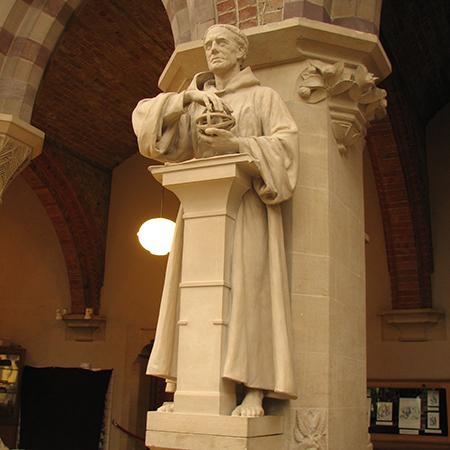 Occam Lectures cancelled. Physics dinner cancelled. Garden party cancelled. (We're gonna need some filler later to make up for this lack of events.) Only some of the students have been in Oxford some of the time. But the core of learning and researching and teaching physics has remained alive and strong here at Merton.

It has surely been the hardest for the freshers. Catching up with them about halfway through the year, I was impressed by their attitude and focus. They approached the year mostly unperturbed: as keen as ever to get to grips with the new Physics and managing to still work together to understand the harder material/problems. \begin{filler} We are perhaps lucky that the work in Physics partially involves an escape to a world of symmetry – of Gaussian sculptures intersecting curling electromagnetic field lines, of Einsteinian folk with metre sticks and wristwatches at every point in the dancing geometry of spacetime, of lattice-based particles caring only for themselves and the MFT-defined group identity or with nationalistic tendencies ("It's just me and my nearest neighbours") – where there is the dependable satisfaction of successfully completing a derivation or calculation that may also be profound. I expect in some of the essay subjects the mood of the student and the mood of the world may have a more direct impact. \end{filler}

In lieu of other events the online quiz was held and had a good turnout. There was World, Oxford and Merton-Physicist trivia. The winners were awarded £10 vouchers.

For the election of the next RBS president, we had three candidates step up to the plate: Jan, Nic and Marcell. David Hosking (President 2017-18) began the tradition of humorous campaign videos that are then posted to the RBS Facebook page. Marcell and Nic delivered with classic in-jokes and their own funny, distinctive touches. These videos and my encouraging (nagging) emails must have galvanised the electorate: we had 20 votes cast and a tie, for the first time since historical records began, with Nic and Marcell elected the society’s co-presidents. I think they’ll make a really great team, so watch this space.

Though not strictly within the domain of the Roger Bacon Society, I must mention Schools Dinner (for the exiting fourth years and their tutors). It will stand as one of the warmest memories from all of our time here at Merton, and we are very glad it could go ahead.

Being a product of Merton College, we love tradition. As always, the physics freshers were warmly welcomed to the College with a sumptuous spread of the best value snacks that we could carry from Tesco to College in one trip. After some introductions and icebreakers, we, once again compelled by tradition, migrated to the famous Turf Tavern for a drink (even though it was only the early afternoon). The Freshers’ Tea provides an easy and informal opportunity for new and old generations of Merton physicists to come together – a chance to pass down old wisdom (like warnings of the notorious Hilary term problem set 5) and think up new wisdom (like how to get the best armchair in classes).

The tea, however, simply pales in comparison with the flagship event of the year: the Society’s Black Tie Dinner in Hilary term. Once again, Merton’s Kitchen laid on a fabulous four-course meal for us all, which was thoroughly enjoyed. The question, however, on everyone’s mind was the results of the annual election for the next Society president. Given the passion of the large physics community at Merton, it was slightly disappointing to see that only one candidate, Richard Chatterjee (2017), nobly volunteered. This disappointment was based in the fact that election campaign materials have, in recent years, become extraordinarily elaborate, sometimes taking the form of short films.

But, to our surprise, Richard (even in the absence of any competition whatsoever) produced a stunning video mirroring the recent Avengers film, poignantly putting forward why he deserved everyone’s vote. I think, unfortunately, this video may have scared everyone off, because Richard only won the election by the slimmest of margins (3 votes, to 2 for R.O.N.).

The dinner was concluded by a speech from me which largely recycled last year’s material (something which was not well received by certain recent alumni, but luckily my term was almost over so an impeachment would be futile), followed by a (lengthy, it must be said) speech from the now-incumbent Richard, listing a great many (many, many) distinctive qualities of the archetypical Merton physicist.

Unfortunately, we were not given the luxury of our Summer Garden Party due to the current pandemic, which is a great shame. But, remaining optimistic, perhaps this will mean we are looking forward even more to welcoming the next cohort of physicists to the College this Michaelmas. Or, maybe those of us leaving the College have been given yet another excuse to come back and visit in the sunshine.

The year began in traditional fashion. The physics freshers were warmly welcomed to the College with Colin the Caterpillar cake and a trip to the famous Turf Tavern. The Freshers’ Tea provides an opportunity for both new and old generations of Merton physicists to come together – a chance for the older physicists to pass down warnings of the notorious Hilary term problem set 5, which serves as a rite of passage for any member of the Roger Bacon Society.

Of course, the big event on the Roger Bacon Society calendar is the Society Dinner early in Hilary term. Eventful as ever, this year saw another round of society elections, a pricing scheme so complicated it could have been a question on one of Professor Schekochihin’s problem sets, and a colourful assortment of wines (which certainly did not endear me to the catering staff). The highlight of the night is the culmination of a month’s worth of campaigning for the Roger Bacon Society presidency – a coveted position that secures one’s place in Merton physics folklore. The election this year was certainly more eventful than the previous year, with double the number of candidates in the running: a spectacular increase in the number of candidates from one to two.

In recent years the campaigning has become ever more elaborate with video montages becoming a staple feature, and this year was no different. Leonie Woodland (2016) kicked off the contest with a detailed manifesto, before Jules Desai (2016) hit back with a slanderous video painting a nightmarish picture of what it would be like to have Leonie in charge. There were also some damning accusations of Russian involvement in the election, as is typical, but also of Leonie being behind the Cambridge Analytica scandal – a testament to just how involved the Roger Bacon Society is on the global stage. In a touching example of overcoming prejudice against physicists and philosophers in our time, Jules’ victory in the elections was confirmed in limerick form by the outgoing President Matthew Davies (2015). Riding high on the adrenaline of the election results, Jules struggled to keep his hadron in order, delivering a raucous speech detailing various scandalous remarks that had apparently been made by the Merton physics professors – very fitting in this age of fake news.

The year concluded as it began with Colin the Caterpillar cake on the lawn as the undergraduate physics community at Merton assembled for a little bit of food and sunshine before exams began.

The highlight of the Roger Bacon calendar is the annual society dinner, and this year was no exception. Students, tutors and alumni of the College came together to enjoy great conversation, a menu packed with the very best that the Merton kitchens have to offer, and fine wines flowing throughout.

The dinner is particularly important to the Society as it is the stage for the announcement of the results of the RBS annual presidential election. The election is traditionally fought on the basis of vicious meme warfare, and this year was no different, despite there being only one candidate, Matthew Davies (2015). Hostilities started in the week leading up to the dinner when Davies launched a slanderous video attack on himself, filled with cruel insinuations that he bears similarities to the Prime Minister, Darth Vader and a Physics and Philosophy student. Undeterred, Davies uploaded a response video to his own attack, offering unrealistic promises and comparing himself to Professor Schekochihin; both, of course, are tried and tested methods of winning Roger Bacon Society elections. In the end, it emerged that Davies had done enough to win the Presidency, securing an impressive 25% of the popular vote.

In celebration of his fine victory, Davies delivered a ‘call-and-response’-style acceptance speech which was predictably lost on most of his audience. Unconfirmed student reports state that Professor Binney was heard to exclaim after the dinner: "I didn’t really understand Matt’s speech [groan], but I still thought it was great banter! [cheer]."

The Roger Bacon Society, under the tyrannical reign of President Hornigold (2013), celebrated another year of sustaining physics excellence. As time continues, habits harden into traditions, which solidify into iron-clad laws. For this reason, all the physics freshers in Michaelmas were dragged along to Physics Tea in the JCR; celebrated with a variety of snacks, goodies, and some almost-cakes baked by the President himself. As is our custom, the Baconians descended to the Turf Tavern for further discussion and a rendezvous with any surviving postgraduates. The physics fun went on long into the evening. Many escape attempts were foiled by the swift and decisive action of physicists in the older years.

After the welcomes were over, the society lay dormant until its flagship event: Physics Dinner. This affair, for the second time, invited recent alumni and it was lovely to be reunited with old friends. Undergraduates and tutors alike shared in the wine, mezze, chicken, and a sumptuous cheese course, gradually becoming intoxicated with the intellectual conversation on offer (and port). The low-light was undoubtedly the speech, where the President staggered around delivering physics-based chat-up lines to frightened and concerned professors, and rambling on about Genghis Khan. Fortunately, he was eventually forced to deliver the election results. Despite massive Russian interference on behalf of Robert Stemmons (2014), and a spirited effort by seasoned campaigner Toby Adkins (2014), David Hosking (2014) was duly elected President: he will surely take the RBS from strength to strength in the coming years.

The final event in our calendar was the garden party in Trinity Term. It was an astonishing feat of organisational and planning success, taking place on the only overcast day in a glorious three-week heatwave. Despite the best efforts of RBS management, some undergraduates did, in fact, manage to attend, and enjoyed the opportunity to sample a delicious pavlova and mitigate the stress of exams with the aid of Pimms and sangria.

On a personal note: being the President of the Roger Bacon Society has been one of the highlights of my time at Merton and giving a presidential speech on the day of the US President’s inauguration was a miracle of timing. I hope that the undergraduate physicists of Merton College recover quickly from my reign of terror, and find in their hearts and minds the fortitude to struggle with the secrets of the universe until the end of their days.