The History of Merton College Chapel

Merton College Chapel has been a place of prayer and worship for over 700 years. Work on the church of St Mary and St John, now the Quire of Merton College Chapel, started in the late 1280s to replace the parish church of St John the Baptist which stood on the site now occupied by the north wing of Mob Quad. The Quire's large size attests perhaps to thirteenth-century confidence in the growth of the College as well as the practical need to accommodate parishioners. 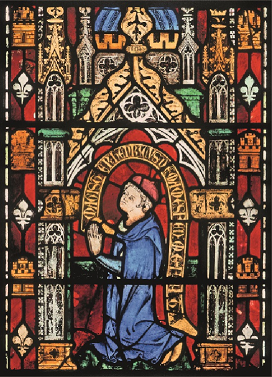 Of the seven pairs of windows in the side walls of the Quire, 12 contain the original glass from this period, set in Decorated tracery. This figured and grisaille glass was given to the Chapel between 1289 and 1296 by Henry Mansfield, fellow of the College. The heraldic glass and the Annunciation scene in the East Window are also original and date from the late 13th century; much of the glass in the rest of the windows dates from the 15th century.

The 1300s saw considerable expansion of the chapel. By the end of the century the Crossing and South Transept had been built, followed in 1425 by the North Transept. This space was designated for the use of parishioners, accounting for the ability to enter the Chapel from the street.

The Chapel was never completed; the site originally intended for the nave was leased in 1517 to Bishop Foxe, the founder of neighbouring Corpus Christi College. The resulting T-shape became the model for many other Oxbridge college chapels. Despite the strain on College finances, the late medieval chapel was rich in ornamentation, including a gothic screen, fine sets of vestments and twenty-four copes. The pre-Reformation lectern, a gift from John Martock in 1504, is one of the finest examples of the period, and continues to be used at Chapel services.

As elsewhere, religion became deeply divisive at Merton during the Reformation. Under Edward VI traditional worship in the Chapel, including masses and requiems for the souls of benefactors, would have ceased. It was probably at this time that the statues and stained glass were removed. In the Marian reaction of 1553-8 the College was strongly Catholic, and subsequently attempted to resist Protestant interference in Elizabeth's reign. In a famous episode, the College stood siege against the officers of Archbishop Parker for three weeks. 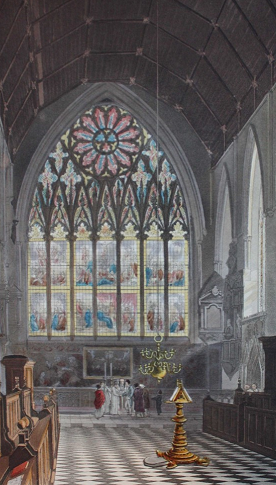 By the seventeenth century the Chapel was in need of refurbishment; the South Transept roof collapsed in 1655, smashing many of the medieval monuments below. Christopher Wren was employed in 1671 to fit up the interior with a new screen (costing £1,130) and stalls in the classical style. The medieval bells were also recast.

The nineteenth century saw extensive changes to the Chapel interior. Under the influence of Blore, Butterfield and Scott monuments from the sanctuary were rearranged in the ante-chapel. Red and yellow tiles were fitted amongst the black and white ones of the quire floor, a gothic font was introduced to the North Transept and the new Victorian roof was painted. By 1886 the College brewery, that had occupied the Sacristy for nearly sixty years, was removed. Worship changed too; a regular Sunday Communion, and morning and evening services, were established in 1870.

The new organ, installed in the summer of 2013, was built by Dobson Pipe Organ Builders of Lake City, Iowa, and pictures from the construction and installation processes can be seen on the Dobson Organs website.

The Chapel bells were cast by Christopher Hodson in 1680. They are the oldest complete ring of eight by one founder in existence. The tenor weighs 24 hundredweight and is tuned to E♭. One or two bells are tolled before every service in the Chapel. All eight are rung on a number of special occasions in the year, including Remembrance Sunday (half-muffled), Shrove Tuesday (when the College commemorates the Founder, Walter de Merton), HM The Queen's Official Birthday, and at weddings. They are normally rung by the Oxford Society of Change Ringers.