The Warden of Merton College, Professor Irene Tracey CBE FMedSci, has been nominated as the next Vice-Chancellor (VC) of the University of Oxford. Following approval from Congregation, she will succeed the current VC, Professor Louise Richardson, in 2023.

"I am honoured to be nominated as the University of Oxford's next Vice-Chancellor, and I wish to thank my colleagues for entrusting me to lead such a magnificent and world-leading academic institution.

"The last few years have reminded us all of the crucial role Oxford, along with other leading British universities, plays in tackling global societal issues. That is why I am deeply committed to growing Oxford's impact through supporting its ground-breaking discovery research, its excellence in teaching and its drive to create a global innovation powerhouse.

"The University has also made significant strides in recent years to becoming a more diverse community. Coming to Oxford University from a terrific local school, Gosford Hill, I know well the transformative power that great teachers, professors and a good education can have throughout one's career; Oxford's commitment to attracting the very best students from whatever their background will remain steadfast.

"I am delighted that from next year, having already been an academic leader and college head at Oxford, I will have the chance to further give back to a university that I ardently believe in, and to my home city that I dearly love. I am also proud that I will be passed the leadership baton by Oxford's first female Vice-Chancellor, Professor Louise Richardson, whose outstanding legacy will be built upon in the years to come."

"Whilst I am humbled, honoured and thrilled to have been selected, it comes with a deep sadness too, as it means that I must leave my beloved alma mater. Merton had already left an indelible mark on me, and my interactions since becoming Warden with my fellow alumni, staff and current students have deepened that mark. I will forever think of them and of the College with only fondness and love."

Professor Tracey has led Merton since 2019, and is also currently Professor of Anaesthetic Neuroscience in the Nuffield Department of Clinical Neurosciences, a department she led for several years whilst holding a Statutory Chair. She is also President-elect of the Federation of European Neuroscience Societies. Her research on the neuroscience of pain has contributed to a better understanding of pain perception and the representation of pain in the brain. She was appointed a Commander of the Order of the British Empire (CBE) for services to Medical Research by HM The Queen in 2022.

The Vice-Chancellor is Oxford University's senior officer, responsible for the strategic direction and leadership of the world's top-ranked university. Professor Tracey's nomination has been approved by the University's Council and is now subject to approval by Congregation, the University's sovereign body.

The Chancellor of Oxford University, Lord Patten of Barnes, who chaired the Nominating Committee, said:

"Irene Tracey was born in Oxford and educated at a local comprehensive and Oxford University, for which she has now been proposed as the next Vice-Chancellor. It is an extraordinary story of personal achievement, social mobility and academic excellence. I doubt whether anyone knows more about the University and all its aspects than today's Warden of Merton. She also, as an internationally recognised scientist, has considerable experience at home and abroad. I am sure she will build successfully on the outstanding achievements of Louise Richardson and lead Oxford in coping with the big challenges which lie ahead."

"I am delighted by the nomination of Professor Irene Tracey, who will bring deep-seated familiarity with the collegiate university as well as enthusiasm for its values to the role of Vice-Chancellor. Irene's talents, collegiality and boundless energy will stand her in good stead. I wish her every success and I will do all I can to ensure a smooth transition." 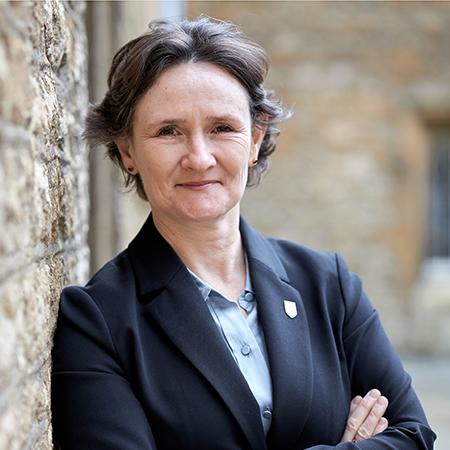