Honorary Fellow and former Warden Professor Dame Jessica Rawson DBE FBA has been awarded an Honorary Professorship at Peking University, at a ceremony on Tuesday 5 November.

Professor Rawson, who is currently Professor of Chinese Art and Archaeology at the University of Oxford, is one of the most active Western scholars in the field of Chinese art and archaeological research. Her publications cover extensive topics and time periods, including the Bronze Age and the Han, Tang and Qing dynasties. Alongside her research work, she has taken on leadership roles at museums and universities. Since leaving a promising career in the civil service in order to pursue her long-standing passion for Chinese art she has served as Keeper of the Department of Oriental Antiquities at the British Museum, as our Warden, and, from 2006 to 2011, as Oxford University’s Pro-Vice-Chancellor. In 2017 she was awarded the Smithsonian Institution's Charles Lang Freer Medal.

Before the ceremony, Professor Rawson met with Peking University Council Chairman Qiu Shuiping, who thanked her for her efforts to increase international recognition for the University's work in the areas of Chinese Archaeology and Art History. Professor Rawson gave a lecture entitled 'Discovering Ancient China - Jade, Bronze and the Silk Road', describing her work with Peking University's archaeologists, and the opportunities this has given her in researching China's history and culture and introducing these to a wider audience in Europe and beyond. 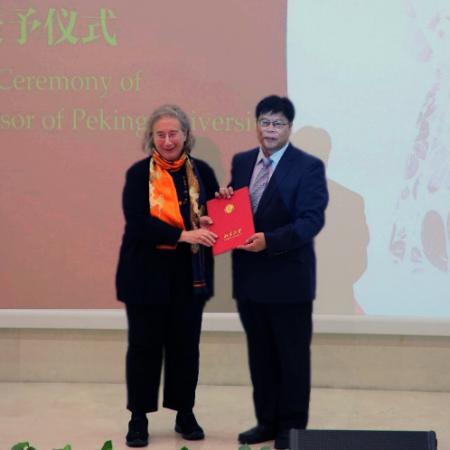