Higgs Hunters, a project organised by Merton's Professor Alan Barr and his colleague Professor Chris Lintott, involved over 37,000 'citizen scientists' in searching for interesting features in data from the ATLAS experiment at CERN.

CERN's Large Hadron Collider (LHC) enables particle collisions to be observed using large complex detectors. Scientists from the University of Oxford are at the heart of the operation, analysis and interpretation of the largest of these detectors – the ATLAS experiment.

One current theory is that the Higgs boson - the existence of which was confirmed in 2012 - might decay into a new particle, dubbed the ‘Baby Higgs’. Through the Higgs Hunters project citizen scientists, including young people and adults from over 170 countries, were able to join the team sifting data coming out of the ATLAS Experiment and flagging events that could potentially show these Baby Higgs particles.

“One of the most innovative aspects to the project was enabling UK school students to analyse the data and perform their own independent research. The students then presented their findings at a conference, alongside researchers from the University. Their findings have been written up as proceedings – these are the first of their kind to be submitted to a CERN experiment” says Professor Barr.

Higgs Hunters is delivered in partnership with The Zooniverse – a world-leading online citizen science platform - and is funded by the UK's Science and Technology Research Council.

The evaluation of the project demonstrated that many citizen scientists increased their knowledge of particle physics, and their confidence and skills.

“The analysis shows some surprises, including that citizen scientists developed their own technical language when searching for new physics in ATLAS event displays” says Professor Barr

There was also a Project Award for Professor Daniel Grimley's Digital Delius project, supported by the Arts and Humanities Research Council, which explored the cosmopolitan connections of the English composer Frederick Delius and his creative affinity with the landscapes and cultures of other countries.

"Our objectives were to enable wider understanding and appreciation of musical sources, using Delius as a rich case study through access to the manuscripts, to show what they mean and to provide a holistic view of the whole life-cycle of a musical work."

Activities organised as part of the project included a schools workshop with the Oxfordshire County Youth Orchestra (OCYO); an OCYO performance for primary age children; a workshop with the Villiers String Quartet and Oxford students using digital technology; and a seminar for GSCE and A-level students on composer manuscripts.

"This was fundamentally a team effort, bringing together musicologists, computer scientists, performers and heritage experts, leading to a number of collaborative projects and papers" says Professor Grimley.

The Vice-Chancellor's Public Engagement with Research Awards recognise and reward those at the University who undertake high-quality engagement activities and have contributed to building capacity in this area. The awards are in three categories – Early Career Researcher, Building Capacity and Projects. Entrants can be at any level in their career and activities of any scale are welcome.

“These awards highlight the many ways that Oxford’s researchers engage with the public. This includes informing and empowering people by sharing research findings; working in partnership with communities to shape research and enabling citizens to take part in the research by collecting and analysing data through Citizen Science. These winning projects also demonstrate that excellence in engagement results in a ‘win-win’ for both researchers and publics alike.” 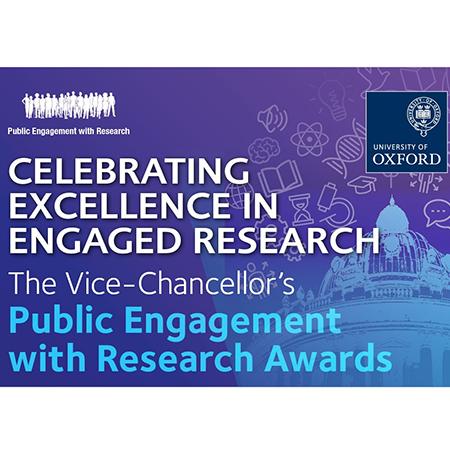