On March 13, Merton College Choir will sing the first ever Anglican Evensong to be celebrated at the altar of the Chair of St Peter in St Peter’s Basilica at the Vatican. The choir’s participation has been enabled by a generous donation from The Reed Foundation.

Archbishop David Moxon, the Director of the Anglican Centre in Rome will preside at the 3:00pm service, while the preacher will be Archbishop Arthur Roche, the Secretary of the Congregation for Divine Worship and the Discipline of the Sacraments at the Vatican. Sir Martin Taylor, the Warden of Merton College—who is the first Roman Catholic to hold this office since the Reformation—will attend the service, accompanied by Lady Taylor. They will be joined by a group of 19 Mertonians, who will be on a College pilgrimage to Rome led by the Chaplain, The Revd Canon Dr Simon Jones. He said:

"I am thrilled that the College Choir and members of the Chapel community at Merton are able to be involved in this historic event. The celebration of Evensong for the first time at St Peter’s Basilica is a fruit of deepening bonds of affection between Anglicans and Roman Catholics, and a sign of hope for ecumenical dialogue."

Permission for this unique occasion was granted by Cardinal Angelo Comastri, Archpriest of St Peter’s Basilica, during a recent meeting with Archbishop Moxon. It comes just five months after Pope Francis and Archbishop Justin Welby celebrated Vespers together at the Basilica of San Gregorio al Celio, to mark the fiftieth anniversary of the Anglican Centre in Rome.

March 13 was chosen as the nearest available day to the historic feast day of St Gregory the Great, who has become an unofficial patron of relations between the two churches. As Pope, St Gregory sent St Augustine to England in 595 to evangelise the Anglo-Saxons; Augustine later became the first Archbishop of Canterbury. 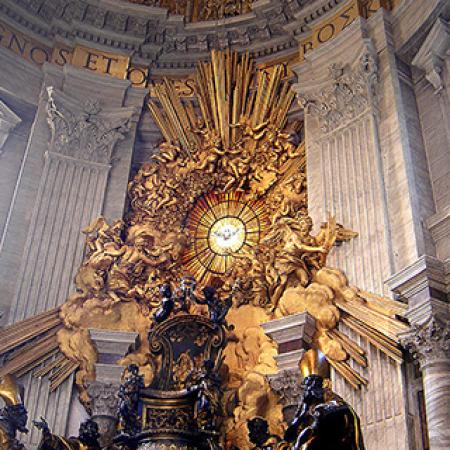