Our aims in visiting Malawi were:

It goes without saying that we aimed to provide as much help as we could in this setting. Of note, Malawi is one of the poorest countries in the world, and the main languages are Chichewa and English (this is not spoken by the majority of people though is the language used by local healthcare workers). Our flight was via Addis Ababa.

For 4½ weeks we were based at Queen Elizabeth Central Hospital in Blantyre, one of three central hospitals that could provide specialist services, as opposed to smaller ‘district’ hospitals. I applied for neurology, though as of writing, there are no neurologists or specific neurology wards in the country, with presentations such as stroke (which was very common) being managed by general physicians. Instead, I was placed on ‘surgery’.

I spent a week on the burns unit, which was eye-opening with regard to aim 3. Many cases were epileptics who had had a seizure (it being difficult to deliver anti-epileptic drugs in the community setting to rural villages) and had subsequently fallen into open cooking fires. Another key presentation was from young children falling into boiling water. Shockingly, a number of patients had presented 1-2 months after the incident. This, I came to understand, was due to a number of reasons. Firstly, patients and their families would have to take time away from work, which many could not afford to do, in order to come to hospital (though healthcare itself was free). Secondly, in Malawi, doctors are often not the first port-of-call in the event of illness, with locals preferring instead to consult magic men or traditional healers. Lastly, the distance and lack of transport made reaching hospital difficult for many patients. It can be imagined then that many patients would die even before being seen by a doctor.

A number of these burns patients had developed Pseudomonas aeruginosa infections of their wounds, which was very clear to see (blue-green pus). Because of limited resources, this had to be managed using honey and vinegar instead of antibiotics like meropenem. These patients often also had multiple co-morbidities, such as malaria, diarrhoeal diseases and malnutrition that made management complicated. What was surprising to me was the poor communication between doctors and nurses that made enacting management plans difficult; here, I was very useful on the team, ensuring that infected patients were isolated, or fluids administered correctly. I feel I became more confident in my abilities and knowledge having been placed here, and was able to contribute to ward rounds – e.g. suggesting XR pelvis for potential osteomyelitis in a paraplegic patient with fourth-degree pressure sores. I was also able to get hands-on, removing bandages and assisting with surgical insertion of a suprapubic catheter.

Outliers taken under the wing of burns/plastics also included snake-bite patients, a key presentation outside of the UK. One patient had been bitten by a ‘mpiri’ snake (an especially poisonous adder). Road-traffic accidents were also common, thanks in part to a culture of drink-driving.

I also spent time on neurosurgery. What was very valuable about my time in Malawi as a whole was seeing the prominent disease signs due to late presentation; in the case of neurosurgery, I saw particularly profound hydrocephalus in infants, or in the context of burns, severe malnutrition causing peripheral pitting oedema. I was also able to practice calculating Glasgow Coma Scores (GCS) for a number of patients both here and, surprisingly, on burns (one child having possible cerebral malaria and a GCS of 4/15). I also became more knowledgeable on syphilis, HIV/AIDS and TB, all of which were very common in the inpatient population. According to the World Health Organisation (WHO) 14% of adults in Malawi have HIV, but this is likely to be much higher in inpatients: previous studies for example have found >30% of pregnant women attending antenatal clinics in Blantyre to be seropositive.

I managed to join a psychiatry clinic. Mental health is not widely recognised in Malawi, depression being taboo, and many are firm believers in witchcraft, with psychosis ascribed to ‘bewitching’. This is important because a delusion is defined as an idea which is unusual in one’s social group/context. I helped medical students there to diagnose a case of schizophrenia in a young man whose visual and auditory hallucinations were, interestingly, well-aligned. This alignment is common in many African countries but especially rare in the UK. Interestingly, the people told us that ‘a man who cooked must be bewitched’.

Outside of the hospital, we visited the key landmarks of the country, which included Zomba Massif and, of course, Lake Malawi. We were also very lucky to be invited by a local student from the Malawi-Liverpool Wellcome Trust (MLW), Jonathan Mandolo, to his home village of Mbonekela, which is to the north-east of Dowa (central Malawi). This was a rural village, which lacked even running water or electricity. As one can see from the picture, the roads were in an appalling state, showing another obstacle to medical care. Once there, we, among other things, met with the village magic man, who was the first person the townspeople would go to should they become ill. We received a local chicken as a gift. Many of the villagers had never seen a white person before and the children were understandably nervous!

Also of note, the climate was markedly different to the UK. It was actually hotter further from the equator, owing to the Chikwawa being lowland and hence a heat-trap; the temperature there during our visit to Majete was 41°C and the humidity >90%. This, along with ‘black-outs’ of running water and taking doxycycline antimalarials, meant we often felt nauseous.

The main carbohydrate was ‘nsima’ (known by many other names, e.g. ‘ugali’ in Kenya), a savoury maize flour porridge. This was classically served with chambo, a species of fish found only in Lake Malawi. This is, sadly, not sustainably fished. Rice and potatoes have been introduced to Malawi to try to reduce the dependence on maize crop.

With regard to the wildlife, we saw baboons walking freely around the streets of Zomba (the original capital established by the British in the south-east of the country). Whilst at Majete Wildlife Reserve, we were lucky enough to see elephants and vervet monkeys as well as nyala and impala antelopes.

Whilst there, the political climate was uncertain because the presidential elections (in 2019) had been ruled by the Constitutional Court to be undemocratic and the results annulled, leading to protests in the capital (Lilongwe). With the results annulled, the vice-president was replaced in February by the previous vice until the elections are repeated later in 2020. This seems to have had a stabilising effect. Corruption is a serious problem within the country.

At the time, Malawi was free from coronavirus with no reported cases; I was unable to complete the second half of my elective, which was due to be neurosurgery in Malta, due to the coronavirus pandemic.

Funding for my travelling expenses was provided by Merton College, in the form of a Graduate Research and Supplementary Travel Grant, for which I would like to give special thanks.

Following on from his original report, Thomas has sent through some more photos and an update on the impact of the coronavirus crisis on the health system in Malawi: 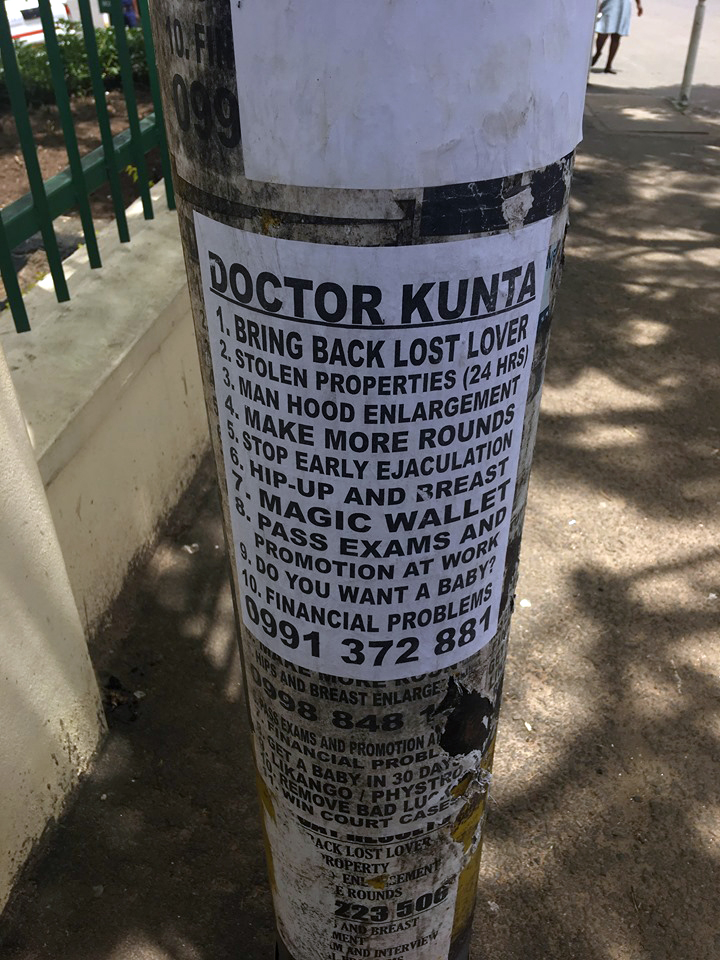 In neighbouring Tanzania, 400 women were murdered in 2016 after being accused of being witches. Bizarrely, ‘witch-doctors’ [the actual term used] occupy a grey area – viewed by some as benign healers. The posters here, photographed by me whilst in Blantyre, advertise the services of Dr Kunta, one such witch-doctor offering 'medical' and financial help. There have been a number of murders of albinos in recent years by witch-doctors, as their body parts are believed to have magical powers.

Sadly, QECH stopped accepting patients in April (see newspaper article) because healthcare workers went on strike in order to get sufficient personal protective equipment (PPE), the virus having at last arrived in Malawi with the first related death on 7 April. At the end of my elective, I left behind PPE including face-masks with visors, gloves, aprons and hand-wash which I had brought from Oxford's John Radcliffe Hospital.