40 Years of Progress: Oxford, gender equality, and academia since 1980

This discussion explored the full spectrum of gender equality in Oxford and how it has evolved since women were first admitted to Merton College. Three pioneering women in academia shared the challenges they faced during their careers and personal journeys, and reflected on the progress that has been made.

The panel also discussed less frequently asked, but equally important, questions: are there any advantages that have arisen as a result of being a woman in male-dominated fields? Were there any challenges they did not face which their male peers did? And how will changing ideas about gender shape universities and academia as we look to the future?

Professor Dinah Birch CBE, Pro-Vice-Chancellor for Cultural Engagement and Professor of English Literature at the University of Liverpool — the first woman to sit on the College’s Governing Body, as a Junior Research Fellow from 1980 to 1982.

Professor Alison Finch, Honorary Professor Emerita of French Literature at the University of Cambridge — Tutor in French at Merton from 1995 to 2003 and one of the first female Fellows at Churchill College, Cambridge, where she is now a Life Fellow.

Professor Lyndal Roper, Regius Professor of History at the University of Oxford — the first woman to hold the position. She is an Honorary Fellow of Merton and was first at the college from 1983 to 1986 as a Junior Research Fellow. 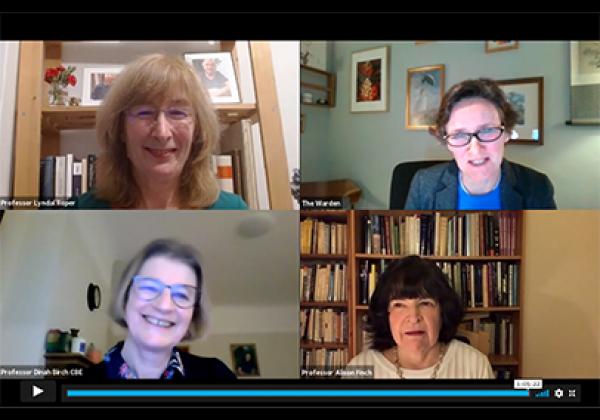