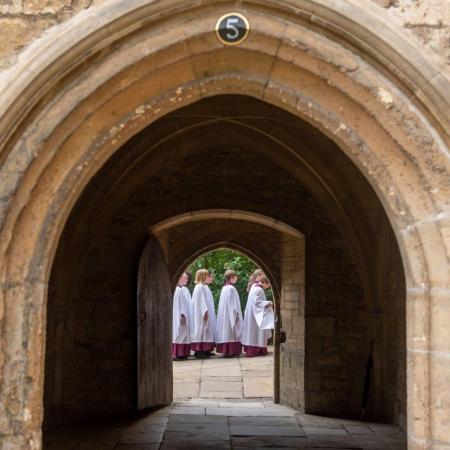 On Wednesday 12 October, two new Senior Choristers were inducted at Choral Evensong, taking on new responsibilities as role models within the choral foundation. Sophie and Anna received their medals during Wednesday night’s service, in the presence of the other choristers and probationer choristers.

The Girl Choristers were founded in 2016, when Merton College became the first College in Oxford University to admit girls into its Choral Foundation. 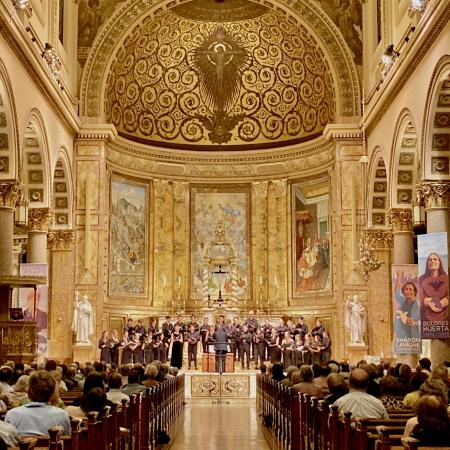 Sacred choral music from both sides of the Atlantic will travel with the Choir of Merton College, Oxford on its first tour since before the Covid pandemic. Merton’s choral scholars and their Director of Music Benjamin Nicholas are bound for the United States this autumn to perform at the New York City Church of St. Ignatius Loyola on Park Avenue (15 September 2022). Their itinerary opens with Choral Evensong given jointly with Harvard University Choir at the Memorial Church of Harvard University (11 September), followed by a concert (12 September), and also includes performances at Trinity Church on the Green in New Haven (13 September) and Princeton University Chapel (16 September).

“Touring is very important to us on so many levels,” comments Benjamin Nicholas. “Our university terms are quite short, so working together in a concentrated way outside those three eight-week periods is invaluable to the choir’s musical development. It’s also hugely important socially for this age group. I think any of our choral scholars would say that touring is one of the advantages of being in a collegiate choir. We’ve missed that enormously since we last toured in December 2018. The new generation of Merton singers, who joined us in autumn 2019, has never been on tour as a group. That makes this US trip doubly important.”

Nicholas has chosen works that bring out the best from his singers and are sure to connect with the choir’s American audience. His compelling programme includes the motet Senex pueram portabat and again (after ecclesiastes), respectively by New York-based composers Nico Muhly and David Lang. The latter work, a setting of Hebrew verses freely adapted by the composer from the Book of Ecclesiastes, unfolds as a short meditation on the strands of hope and futility woven into the pattern of natural and human cycles. The choir is also set to perform English sacred works with impeccable royal connections, chosen to mark the Platinum Jubilee of Queen Elizabeth II.

Merton College Choir’s concert bill opens with the Mass in G minor by Ralph Vaughan Williams, the Creed from which was performed at the Queen’s coronation service in 1953. O Lord, make thy servant Elizabeth and Jehova, quam multi sunt hostes mei, majestic masterworks by William Byrd and Henry Purcell, evoke the golden age of music from England’s Chapel Royal. They are prefaced by Ave Regina caelorum, originally written in 2014 by today’s Master of the Queen’s Music, Judith Weir, to celebrate the 750th anniversary of Merton College and included in the Merton Choirbook, a compendious collection of new choral compositions. The royal theme runs through the programme’s second half in the form of Bring us, O Lord by William Harris, organist of St George’s Chapel Windsor, who taught piano to the young Princess Elizabeth and was assistant conductor at her coronation, and Hubert Parry’s I was glad, performed at every coronation since Edward VII’s in 1902.

Nicholas and his choir recorded an album of contemporary American music shortly before the pandemic began. It is scheduled for future release on the Delphian label. “We haven’t had the chance to sing our new American repertoire in concert, so I chose two representative, neatly contrasting pieces from the recording for our tour,” comments Merton’s Director of Music. “The Muhly and Lang works make a very good fit with the rest of the programme.”

The next Merton College Choir album, scheduled for release by Delphian on Armistice Day, 11 November 2022, couples Ian Venables’ Requiem with anthems for choir and orchestra by Herbert Howells. Venables added orchestral parts to his Requiem setting, first performed two years ago with organ accompaniment, which receives its debut recording here in company with the world premiere recording of his anthem God be merciful. The album also includes the first recording of Howells’ The House of the Mind in its version for choir and orchestra, and premiere recordings of newly orchestrated versions of O pray for the peace of Jerusalem and Like as the hart desireth the waterbrooks.

“This is an exciting time for Merton College Choir,” says Benjamin Nicholas. “We’re busy making recordings and looking forward to our tour to the States. This is on top of our regular work of singing Evensong every Tuesday, Thursday and Sunday in Merton Chapel. This will be the choir’s fourth tour to the USA since its formation in 2008. I know from past experience that they are a great way to build morale, raise standards and reach new audiences.”

On Saturday 23 April, the Merton College Girl Choristers visited Westminster Abbey to sing Choral Evensong. 23 choristers travelled down to London, beginning the day with an exciting river tour from Greenwich Pier, arriving in Westminster by boat. After lunch, the girls rehearsed for the service in the Abbey and then it was time for Evensong at 5:00pm. The service was a resounding success, with music by Sumsion and Parry. The service was enjoyed not only by the congregation of the Abbey but also by supporters who had travelled from Oxford to show their support. Bravo choristers!

As part of BBC Radio 3's Choral Evensong series, tune in at 16:00 BST on Wednesday 20 April 2022 to hear the College Choir, with music by Visiting Research Fellow in the Creative Arts, Cheryl Frances-Hoad, Stanford, Vaughan Williams and Widor. 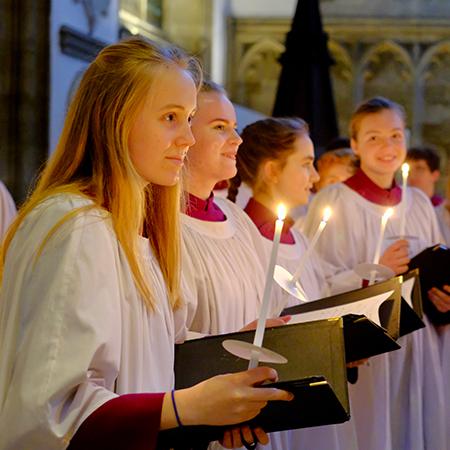 The Choir of Merton College is delighted to invite the public to join us for our Advent Carol services on Saturday 27 and Sunday 28 November! All are welcome to join us for these candlelit services in Chapel at 5:30pm – doors will open at 5:00pm. No booking is required.

The choir will sing carols by Kerensa Briggs, Elizabeth Poston, Mendelssohn and Rachmaninov, as well as a carol by Cheryl Frances-Hoad, Merton’s current Visiting Resident Fellow in the Creative Arts. 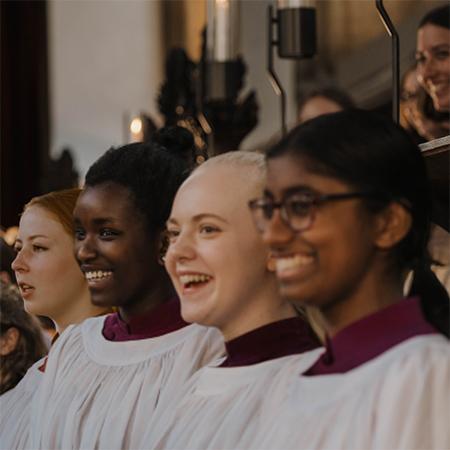 On Wednesday 20 October, two new Senior Choristers will be inducted at Choral Evensong. Hannah and Hattie, both in Year 12, will take their places as leaders and role models to the younger choristers. Both will be awarded their medals during Wednesday night’s service, in the presence of the other choristers and probationer choristers.

Hannah and Hattie will be only the second cohort of girls to receive the honour of becoming Senior Choristers since the choir was established. The Girl Choristers were founded in 2016, when Merton College became the first College in Oxford University to admit girls into its Choral Foundation.

The Choir have created a new video to promote the Choral Scholarships offered by the College: 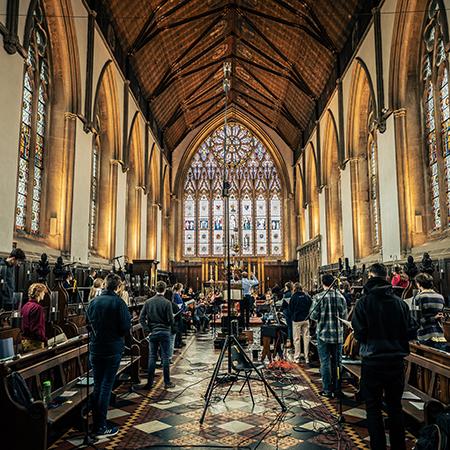 In June the College Choir recorded a disc of music by Herbert Howells and Ian Venables for Delphian Records. The repertoire includes music for choir and strings by Howells, and Venables’ Requiem, scored for orchestra and choir. The disc is scheduled to be released in June 2022. 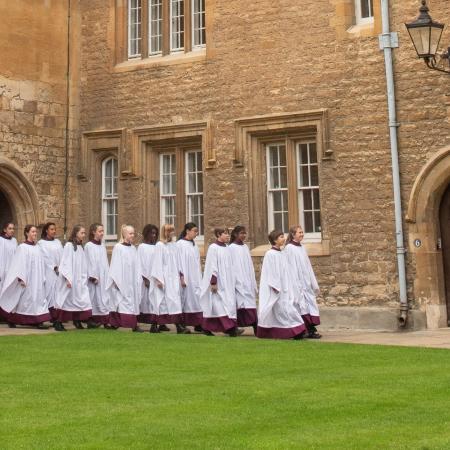 The benefits of Choristership include the opportunity to sing weekly services in one of Oxford's most famous buildings, singing lessons, tours, residential trips and lifelong friendships. All aspects of Choristership are provided free of charge. The Girl Choristers of Merton College are Associate Members of the Choir Schools' Association.

Our Director of Music, Benjamin Nicholas, is happy to meet with potential Choristers and their families virtually. Please explore our brochure above for details of how to arrange a meeting.

Alex has been selected for the Young Composers Scheme, which supports the development and diversity of new choral music. Selected composers attend a range of residential courses, creative retreats, workshops, and performance showcases, and receive peer and professional mentoring along with advice and tuition from distinguished composers. It also provides the opportunity to write music to be sung and performed by NYCGB’s five choirs.

Elizabeth has been accepted onto the Fellowship programme for emerging choral leaders which provides opportunities to train and work with NYCGB staff and members across the range of its choirs and NYCGB’s Learning & Engagement programme. Participants also have access to a unique mentoring programme run in partnership with the Association of Teachers of Singing. 2021 Fellows will perform as the standalone NYCGB Fellowship Ensemble and form the core of the National Youth Chamber Choir. 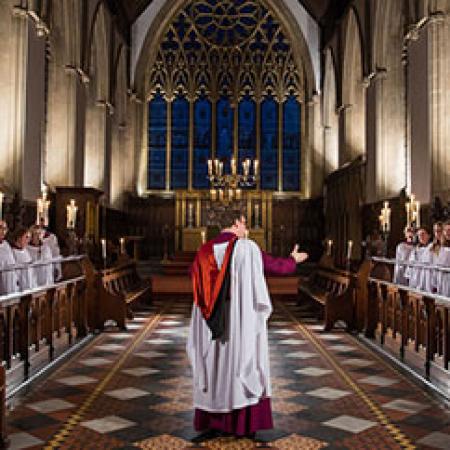 On Wednesday 13 January, a recording of the College Choir singing Choral Evensong was broadcast on BBC Radio 3. The service was especially recorded in October 2020, and included music by Bach, Elgar, Stanford and Hassler. 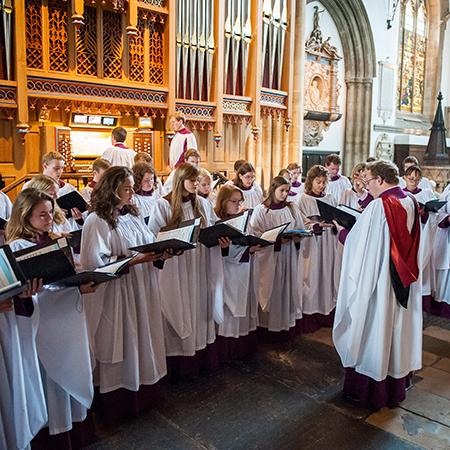 The College Choir is currently recruiting singers in all voice parts to join the choir from next academic year. Undergraduate and Postgraduate members of the University may apply, and further details may be obtained by emailing choir@merton.ox.ac.uk.

“I am thrilled that the Merton College Girl Choristers have been elected to Associate Membership. As the choir begins its fifth year, in an institution which is 756 years old, I am grateful that we will be able to draw on the expertise and support on offer at the CSA. I remember how invaluable that wisdom was when I was at Tewkesbury Abbey as founding Director of the Schola Cantorum.”

Three Choral Awards holders from the College Choir have been awarded places on the young artists’ scheme, Genesis Sixteen. For the year 2020/2021, Lucy Gibbs, Frannie Millar and Izzi Blain will receive coaching from Harry Christophers and members of The Sixteen, and will take part in workshops, concerts and broadcasts as members of Genesis Sixteen. The scheme, for 18-23 year olds, aims to nurture the next generation of talented ensemble singers and is the UK’s first ever fully funded programme of its kind. Congratulations Lucy, Frannie, and Izzi! 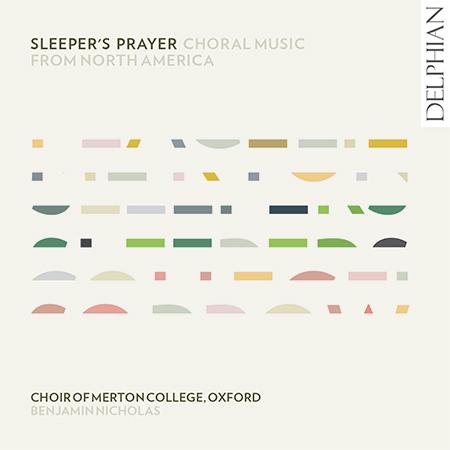 On Friday 22 May, the College Choir and the College’s Girl Choristers released their latest recording, Sleeper’s Prayer: Choral Music from North America. The disc focuses on American music of the late twentieth and early twenty-first centuries, and begins with pieces by David Lang and Nico Muhly, who have written or arranged works especially for the choir. A highlight of the disc is Muhly’s Song of Ephrem the Syrian, written for the College Choir and the Girl Choristers thanks to the generosity of The Reed Foundation. The disc also showcases two solo organ works by Muhly, and a transcription from his mentor Philip Glass’s opera Satyagraha, alongside works by Libby Larsen and Abbie Betinis. Choir & Organ magazine has written of the disc that “the Merton singers are in great voice and Merton Brass could dep[utise] for the angels”.

We are delighted to announce that the Choir’s recording of Gabriel Jackson's The Passion of Our Lord Jesus Christ has won the Choral Award at the 2020 BBC Music Magazine Awards. We're grateful to all those who took the time to vote after the recording was shortlisted by a panel of expert critics - and of course we're thrilled with the outcome!

The Choir’s recording of Gabriel Jackson’s The Passion of Our Lord Jesus Christ has been shortlisted in the Choral Category of the BBC Music Magazine Awards 2020.

There are seven award categories, each shortlist selected by a jury of expert critics and representing the very best classical recordings reviewed in BBC Music Magazine in 2019. 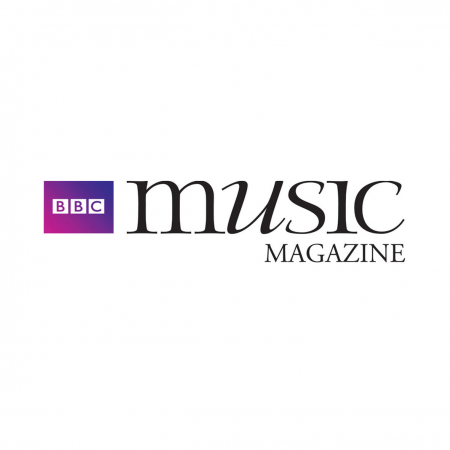 Awarding five stars for both the performance and the recording, BBC Music Magazine has selected the choir's recording of Gabriel Jackson's The Passion of our Lord Jesus Christ as its Choral & Song Choice for May 2019. Their reviewer said:

"This outstanding recording of Gabriel Jackson’s retelling of the Passion story bursts with energy... Jackson’s engaging score is richly colourful and his instrumental writing proves a particular highlight."

Choral Evensong was broadcast on BBC Radio 3 on 26 December 2018. The College Choir sang music by Parry, Dyson, Bainton and Holst.