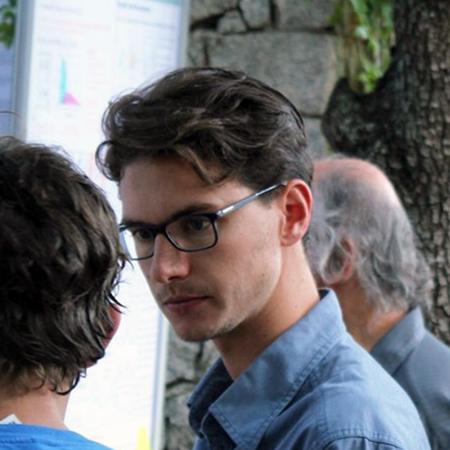 Thomas Scaffidi read for a DPhil in Theoretical Physics:

"My research interests lie in the broad field of condensed matter physics, whose purpose is to understand and engineer a large variety of exotic phases of matter, ranging from superconductors to photovoltaics.

"The concept of emergence is central to this field: the collective behaviour of a large number of particles interacting with each other is described in terms of emergent degrees of freedom that are not simply related to the physical description of each particle taken individually.

"For example, one can think of fluid mechanics as an emergent description of a very large number of water molecules, with its own interesting effects—such as vortices or tsunamis—that could not be deduced from the physics of a single molecule.

"My work consists in the theoretical study of topological phases of matter, whose microscopic constituents behave according to quantum mechanics and whose emergent collective behaviour is described in terms of topological invariants. In short, topologists are the kind of mathematicians who cannot distinguish a coffee mug from a doughnut, since one can be continuously deformed into the other.

"So far, I have been working on two such exotic phases of matter: fractional Chern insulators and topological superconductors. Both these systems could potentially host emergent excitations whose dynamics would depend only on the topology of their trajectories in space-time. By using the braiding of these excitations around each other, it would be possible to realize a quantum computer, which could carry out almost instantly calculations that would otherwise take a time of the order of the age of the universe on the best super-computers available.

"Applying various types of analytical and numerical techniques, my aim is to predict which microscopic systems should host desirable phases of matter and to compare these predictions with experiments. One crucial part of my work is therefore to meet with different experimental groups working on such systems and the generous Merton College travel grant was very helpful in that respect."