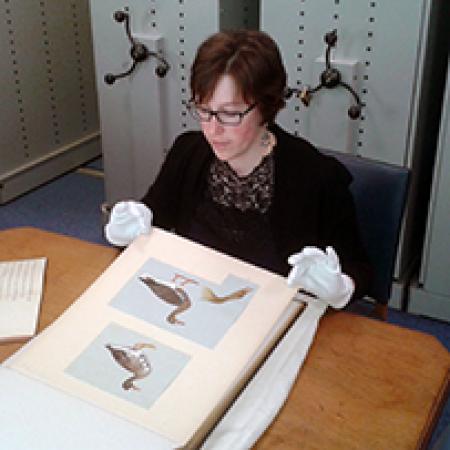 Ann-Katrin Gill is in the second year of studying for a DPhil in Oriental Studies:

"My dissertation project focuses on the translation and commentary of two unpublished Egyptian ritual handbooks, kept today in the British Museum: P.BM EA 10252 and P.BM EA 10081.

"Both papyri are inscribed in hieratic, a cursive form of the hieroglyphs. They come from a Theban temple library and are dated to the late fourth century BC. The texts, one of which I already studied during my Master of Studies, were originally composed for the cult of Osiris, the god of the netherworld, in order to restore him to life, after his brother killed him. During the annual Osiris-mysteries, his fate was symbolically re-enacted and his assembling and revivification were celebrated.

"As he was in constant danger of a second death, caused by his brother, a collection of magical defence and protection rites existed, of which the aforementioned papyri are the main representatives. These were later adapted as funerary texts for the benefit of the deceased Pawerem.

"Among the few known Osirian ritual handbooks, the two BM-papyri are unique, not only because of their length and variety of texts, but also their abundance of later annotations and glosses. Thus, they are a treasure trove for grammar, palaeography, and lexicography.

"I am deeply grateful to Merton College for funding my dissertation project in partnership with the Arts and Humanities Research Council and to my supervisor Professor Mark Smith. "