She's cracked it! Merton undergraduate Alice Miller unravels the mystery of the tapestry

At last, the mystery of the tapestry that hangs in the Porters' Lodge has been solved! Alice Miller (2012), a Merton undergraduate studying Mathematics and Philosophy, has managed to unravel the threads of the code woven into Terese Agnew's original artwork Illumination.

When the tapestry Illumination arrived at Merton in 2014, accompanied by its creator Terese Agnew and the Mertonian who had commissioned it, David Harvey (1957) for Merton's 750th Anniversary year, many of the onlookers were curious about its meaning. Both David and Terese kept the secret close to their chests, although they did hand over two sealed envelopes which contained the solution, one of which went to Merton's Librarian, Julia Walworth, and the other to the Development Office to be kept under lock and key.

In the words of David Harvey, "the idea was not to make it unbreakable or astonishingly difficult, but to make the solution achievable by someone who might consider themselves a non-codebreaker."

The challenge was set. Who could crack the code? It was clear that the dots and dashes within the colourful medieval-esque border were Morse code, but once transcribed, it proved to be a much more elaborate puzzle than it had seemed at first glance. It seems that Terese and David had set a mammoth task, so they kindly provided a series of clues to grease the wheels.

And yet it appeared everyone remained stumped—until the Development Office received an email from a Merton undergraduate entitled simply 'Tapestry code' and containing the question "Is this correct?" together with an (almost) complete translation. The sender, undergraduate Alice Miller, had solved it!

The translation proved to be a quotation from Professor Sir Andrew Wiles, Professorial Fellow in Mathematics here at Merton—famed for his proof of Fermat's Last Theorem. Here it is in full:

"Perhaps I can best describe my experience of doing mathematics in terms of a journey through a dark unexplored mansion. You enter the first room of the mansion and it's completely dark. You stumble around bumping into the furniture, but gradually you learn where each piece of furniture is. Finally, after six months or so, you find the light switch, you turn it on, and suddenly it's all illuminated. You can see exactly where you were. Then you move into the next room and spend another six months in the dark. So each of these breakthroughs, while sometimes they're momentary, sometimes over a period of a day or two, they are the culmination of—and couldn't exist without—the many months of stumbling around in the dark that proceed them."

We spoke to Alice to find out more:

The most important question – how did you do it?

Like the clues published online said, the puzzle was encrypted in several 'layers' of cryptography. The first was Morse code, then ASCII, then Atbash, then texting-style abbreviation.

I recognised the original text as Morse code pretty much straight away, and once I decrypted that I got a load of numbers and letters. It looked like a string of hexadecimal numbers, and I had a hunch that they were hexadecimal ASCII values (ASCII is a code that swaps the typable characters on your keyboard for numbers, and also uses numbers to signal things like the start of a new line). I tried running the text through an ASCII converter and it came out with something that looked vaguely like a message, including spaces, capitalisation at the start of sentences, and punctuation, so I knew I was on the right track.

At this point I was stuck, so I looked at the clues that were published online. The third clue was "the oldest trick in the book", so I experimented with a few classic ciphers until one spat out something that made sense. It turned out to be Atbash, which is basically flipping the alphabet the other way round - you swap A for Z, B for Y, and so on. Running the text through an Atbash converter gave me something that was basically readable, but with all the words in abbreviated form, as though someone had texted the message to you.

Finally, I 'undid' all the abbreviations and sent the result off, convinced that I'd finished. However, it turned out that I was missing a sentence off the end of the message, so I plugged what I had into Google to find the last sentence. It turned out to be an Andrew Wiles quote!

At what point did you realise you had solved the puzzle? And what did it feel like?

I sort of knew I was on the right track with every 'layer' I solved—even though the message didn't get any easier to read, intuition told me that it was moving in the right direction, and I could use the clues to confirm this.

The real eureka moment was when I decoded the third 'layer', and came out with a readable message. I was trying out a lot of different codes to find the right one, so it was a complete surprise to find myself suddenly looking at something that made sense, instead of just a jumble of characters. That was when I knew for sure that I was going to solve it. It was a big hit of satisfaction—I'm a mathematician, so I'm sort of used to the feeling of everything suddenly sliding into place when you're working through a problem, but this had an added buzz because it felt like being a character in some sort of historical drama. I mean, it's not every day that you come across a secret code embroidered on a tapestry.

Actually, the feeling of 'illumination' that Andrew Wiles describes in the encrypted message is a pretty good way to sum it up!

Were the clues helpful at all? Any particular one?

I didn't start working on the puzzle until all the clues were out, and it was useful to have them on hand to confirm that I wasn't making any wrong turns. The third clue was the biggest help, because I was really stuck on that part.

Do you have any previous interest in puzzles/codes/solving mysteries?

Yeah, I was really interested in cryptography at school and it's actually one of the influences that pushed me towards studying maths at university! I used to get a team together every year for the National Cipher Challenge, and this puzzle reminded me of a solo version of that.

How do you feel about perhaps emulating Alan Turing and becoming a cryptographer?

I really enjoy both maths and languages, so hypothetically I'd love to do something cryptography-related for a living. I don't have any plans to do so at the moment, though.

What was it like meeting David Harvey and how did you feel when he sent you his letter?

I hadn't been expecting to hear from David Harvey directly, so his letter came completely out of the blue. I checked my pidge one evening, expecting to clear out the usual junk mail, and ended up treating my friends to some very surprised and colourful language when I opened the envelope!

Really though, it was a really lovely surprise to get the letter and then to meet David in person a couple of weeks later. It meant that I got the chance to find out a bit more about the tapestry and the artist, and to thank him in person for his generous reward and for setting the challenge in the first place.

David Harvey (1957) was delighted to hear that the puzzle had been solved. He commented:

"Sometime after the competition had been announced, with little apparent sign of a solution being offered, I have to admit I was becoming nervous, wondering if the task was proving too difficult—or indeed if the intellectual capacity at Merton had gone downhill since my time! So when Alice came forward with her correct translation, I was both relieved and delighted, particularly as it was a woman who had created the piece, and another woman who had decyphered it."

Illumination is the work of Wisconsin textile artist, Terese Agnew, and was commissioned by David Harvey (1957) for the College's 750th year. Why not download a pdf of the tapestry code and see whether you can follow in Alice's footsteps to unravel the code? 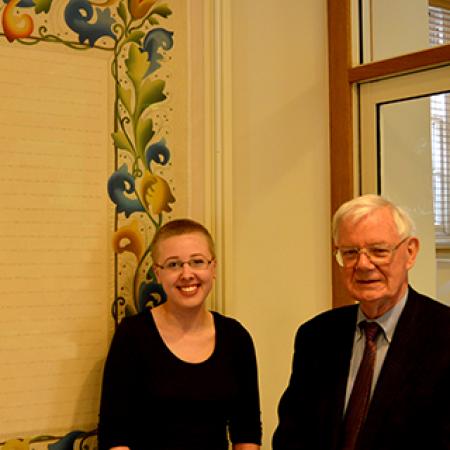