Robert MacLaren, a Bodley Fellow of Merton College and Professor of Ophthalmology at Oxford University, has performed the world’s first operation inside the eye using a robot.

Professor MacLaren, assisted by Dr Thomas Edwards and a team of surgeons at Oxford’s John Radcliffe Hospital, used the remotely controlled robot to lift a membrane 0.01mm thick from the retina at the back of the right eye of the Revd Dr William Beaver, Associate Priest at St Mary the Virgin, Iffley. He is the first patient ever to undergo this experimental procedure.

The robot needs to operate inside the eye through a single hole that is less than 1mm in diameter - and it needs to go in and out of the eye through this same hole during various steps of the procedure, even though the eye may rotate. The device is designed to eliminate unwanted tremors in the surgeon’s hand—such as through their pulse—so that tiny surgical manipulations can be safely carried out within the eye. The robot acts like a mechanical hand with seven independent computer-controlled motors resulting in movements as precise as 0.001mm in scale.

In Father Beaver's case, a membrane growing on the surface of his retina had contracted and pulled it into an uneven shape, distorting the image - a little like looking in a fairground hall of mirrors. The membrane—around 0.01mm thick—needed to be dissected off the retina without damaging it. Surgeons can just about do this by slowing their pulse and timing movements between heart beats, but the robot could make it much easier. Moreover, the robot could enable new, high-precision procedures currently out of reach of the human hand. Using a joystick and touchscreen, the surgeon controls the robot whilst monitoring its progress through the operating microscope.

Whilst robots have been developed for large-scale surgery, such as in the abdomen, until now no device has been available that achieves the three-dimensional precision required to operate inside the eye. The device has been developed by Preceyes BV, a Dutch medical robotics firm established by the University of Eindhoven.  Over the last 18 months, the Preceyes engineers and the team at the University of Oxford’s Nuffield Laboratory of Ophthalmology have worked together to plan this landmark clinical trial.

"There is no doubt in my mind that we have just witnessed a vision of eye surgery in the future.

"Current technology with laser scanners and microscopes allows us to monitor retinal diseases at the microscopic level, but the things we see are beyond the physiological limit of what the human hand can operate on. With a robotic system, we open up a whole new chapter of eye operations that currently cannot be performed."

"This will help to develop novel surgical treatments for blindness, such as gene therapy and stem cells, which need to be inserted under the retina with a high degree of precision."

The Robotic Retinal Dissection Device (R2D2) trial is sponsored by the University of Oxford and funded by the NIHR Oxford Biomedical Research Centre with support from Oxford University Hospitals NHS Foundation Trust, which runs the hospital. Additional funding was provided by Zizoz, a Dutch charity for patients with choroideremia, a genetic form of blindness.

The trial will now enter its second phase, to assess how the robot can place a fine needle under the retina and inject fluid through it. This will lead to use of the robot in retinal gene therapy, a promising new treatment for retinitis pigmentosa, a genetic condition that is one of the most common causes of blindness in young people, and age-related macular degeneration, which affects the older age group. 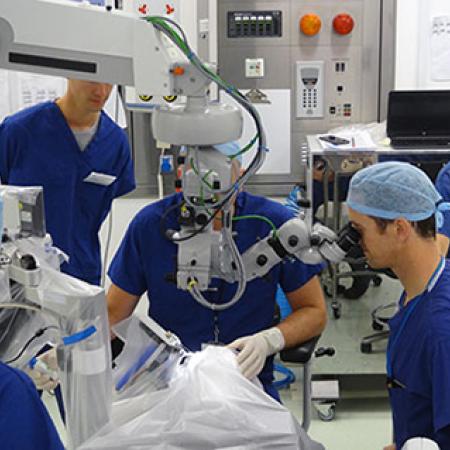