The Championships took place at the Sultan Nazrin Shah Centre at Worcester College, Oxford on Friday 15 and Saturday 16 November, with the final being judged by Professor Anne Davies, Dean of the Faculty of Law at Oxford University, Herbert Smith Freehills Partner Adam Johnson QC, and Professor Alison Young, the Sir David Williams Professor of Public Law at Cambridge University.

Cambridge students Alice Defriend and Cara Donegan took the runners-up spot, and the quality of mooting was so high that the judges and organising committee used their discretion to award two further prizes to Oxford students Charlie Liu and Alyssa Glass, who both narrowly missed out on going forward to the semi-final stage.

18 two-person teams, nine from Oxford and nine from Cambridge, went head-to-head in the preliminary rounds and semi-finals, with each moot lasting for an hour. The moot problem and facts this year centred on disability discrimination, in an employment context for an employee with Generalised Anxiety Disorder (GAD).

The event aimed to promote the intellectual study of disability and its intersection with domestic and international law. The championship is designed to promote the study of disability and the law and, in so doing, seeks to raise awareness of legal issues facing people with disabilities and the need to increase the representation of disabled people within the legal profession.

Reflecting on his involvement and success in the event, Liam McKenna said:

"It was a joy to be involved with… the moot problem was one of the best I have worked with… the issues it raised, on mental health and the Equality Act, were very close to issues that I have seen in real life when working with a charity focussed on equalities law."

Following the competition, there was a panel discussion on BAME individuals with disabilities, and the difficulties they face in the UK. The panel, chaired by Nomfundo Ramalekana, blog editor for the Oxford Human Rights Hub, comprised of a number of pre-eminent academics and leaders of disability networks and charities.

Attendees at the event were also treated to a performance by Handy Voices Signing Choir, a non-auditioning community choir based in Oxford, made up of hearing, deaf, deafened, hard-of-hearing, mixed SEN and members from the LGBTQI community.

In the lead-up to the championship, Herbert Smith Freehills' Ability Network hosted two mooting and mental health workshops at the two universities, in order to promote discussion around mental wellness and prepare students for the upcoming championships.

"We have been thrilled to work with the University of Cambridge and Herbert Smith Freehills to launch the first varsity edition of our successful Disability Mooting Championship. There are 13 million people with a disability in the UK but a discussion of our lived experiences in University courses is scarce. Therefore, this event is a really important way to promote the intellectual study of disability and its intersection with domestic and international law." 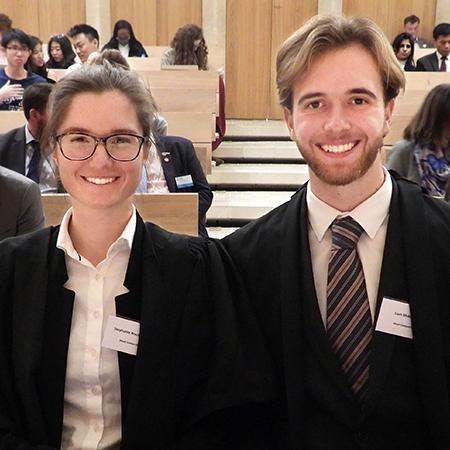