Ameer and Andrew are to be congratulated for expertly representing the College from the quarter-finals onwards. In their remarks, representatives of Maitland Chambers—the competition's sponsor—noted the high calibre of mooting from both teammates; the fluidity of the performance as a whole and, in particular, the ingenuity of the legal arguments deployed.

'Cuppers' is the University’s annual inter-collegiate mooting competition, in which almost every undergraduate college participates, making it one of the toughest competitions for mooters. The problems in each round come from a different area of the Law course, and for the final Ameer and Andrew had to deal with points of appeal on contributory negligence and reflective loss respectively.

We are incredibly proud of Ameer and Andrew, as well as Niamh Herrett, Liam McKenna and Stephanie Bruce-Smith, who represented the College in some of the earlier rounds and thus made this victory possible. Both Ameer and Andrew have received offers to undertake mini-pupillages at Maitland Chambers as a result of their win. 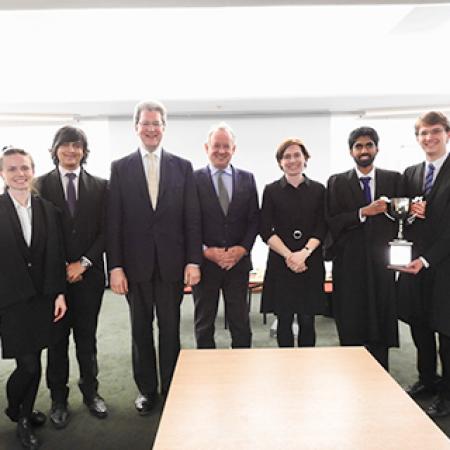