DPhil student Jade Bentil (2019) has been awarded the 2022 Diversity and Inclusion Fellowship from the North American Conference on British Studies.

Jade Bentil’s PhD thesis (September 2019-September 2023) is entitled, ‘“We used our place in the world to imagine ourselves differently”: Black Feminist Activism and the Politics of Race, Nation and Empire in Britain, 1968-1988⁠.’ Her research seeks to expand our understanding of Black British women’s contributions to Black feminist history. Drawing from oral histories conducted with Black women activists, Jade’s work explores how Black women built autonomous spaces to organize in the service of capacious visions of social justice and Black liberation. In addition to adding much-needed texture to our understanding of Black women’s lives in Britain during the late twentieth century, Bentil’s work challenges dominant narratives of feminist organizing in Britain during the late twentieth century and sheds light on the myriad ways that Black women leveraged their marginality in British society to contemplate radical post-imperial futures.

Jade attended the North American Conference on British Studies earlier this month in Chicago, where her award was presented to her. She said of the experience,

“It's an honour to have been awarded the inaugural NACBS Diversity and Inclusion Fellowship for my doctoral research. I am so grateful to have received so much support and am thankful for the generous engagement that the work has received. Thank you so much to the judging panel, the North American Conference on British Studies, Merton College, my family, friends, supervisors and all those that have supported my journey as I near the end of my doctoral study.” 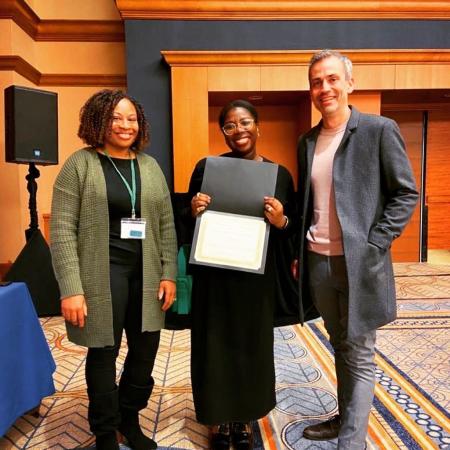