Former student Akira Wiberg has won the main prize of this year's Max Perutz Science Writing Award. Akira received the £1,500 prize for his article 'Getting on your nerves' at the awards ceremony on 15 October.

"It was unexpected, so a very pleasant surprise, and I'm very pleased that the disease I'm studying—carpal tunnel syndrome—has got a bit of publicity today, because it's very debilitating, and important for society. I'm hoping to tread a career as a surgeon scientist. I'm currently a plastic surgery trainee but I want to carry on doing my clinical work alongside research and I think communicating my research with the public is very important. This is my first step in doing that."

Akira's research in the Nuffield Department of Orthopaedics, Rheumatology & Musculoskeletal Sciences focuses on understanding the genetic basis of Carpal Tunnel Syndrome, and ultimately shed light on the pathophysiology of nerve injury through compression. The prevalence of the condition in the UK is 7–16%.

The awards were announced by the Medical Research Council's Executive Chair Professor Fiona Watt, who chaired the judging panel, and fellow judge Andy Ridgeway, journalist and Senior Lecturer in Science Communication at the University of the West of England in Bristol. Akira's article was one of 12 shortlisted from the 116 entered, covering topics ranging from discovery research to clinical studies and development of new technologies.

"Encouraging our researchers to make their science accessible to non-scientists is more important than ever to help us secure public and government support for life-changing research. For many entrants this was their first step along that journey – I wish them every success in future."

The Max Perutz Science Writing Award is named in honour of one of the UK’s most outstanding scientists and communicators, Dr Max Perutz. Max, who died in 2002, was awarded the 1962 Nobel Prize in Chemistry and was the founder and first chairman of the MRC Laboratory of Molecular Biology in Cambridge. Max was also a keen and talented communicator who inspired countless students to use everyday language to share their research with the people whose lives are improved by their work. 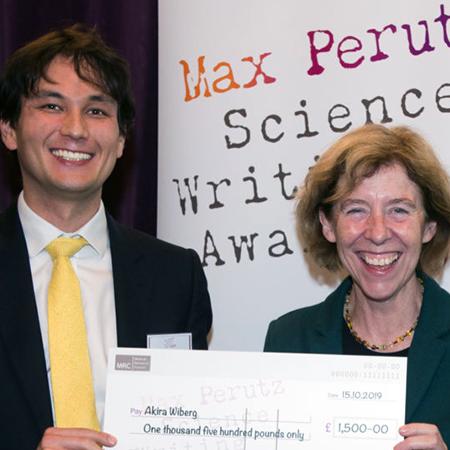