Merton College Choir joined the Oxford Philharmonic Orchestra and Sir Bryn Terfel last week to record a special concert in tribute to the achievements of the Oxford vaccine team. The concert, which will be introduced by Classic FM’s John Suchet, will be streamed in full on the Oxford Philharmonic’s YouTube Channel at 6:30pm on Friday 18 December.

Recorded at the Sheldonian Theatre, the concert will feature interviews from performers, researchers, and Vice-Chancellor of the University of Oxford Professor Louise Richardson. The tribute will also include special messages from the Oxford Philharmonic’s Royal Patron, HRH Princess Alexandra, as well as violinists Anne-Sophie Mutter and Maxim Vengerov, both long-time collaborators with the orchestra.

The programme includes the world première of Joseph’s Carol, performed by bass-baritone Sir Bryn Terfel and written by composer John Rutter as a thank-you and tribute to the work of the Oxford COVID vaccine team, based at the Oxford Vaccine Group and the Jenner Institute. The team will have an exclusive first viewing of the concert before it goes out publicly.

Sir Bryn also joined the College Choir and the Oxford Philharmonic to perform John Rutter's Look to the Day, the Rodgers & Hammerstein standard You’ll Never Walk Alone, Handel’s Hallelujah Chorus and the hymn Abide with Me.

"The atmosphere in the Sheldonian was electric as John Rutter directed the combined forces in You’ll never walk alone and his new composition, Joseph’s Carol. I know that the choir was thrilled to be part of this unique tribute to Oxford’s vaccine team."

"I am delighted to have been invited to contribute to this celebration, which expresses in music the gratitude we all feel in our hearts. As always, music goes beyond words."

"We are extremely grateful to the researchers, medical staff and volunteers based at the University of Oxford for their tireless work in the search for treatment and a vaccine for COVID-19. We offer this concert in celebration of their recently-announced achievements and are thrilled to be joined in our message of thanks by a stellar line-up of classical musicians.

"We hope that the tribute will be shared by everyone and serve as a reminder of the scientists’ journey from the moment they set out to discover a vaccine to the moment they offered us all hope and salvation."

"We would also like to dedicate the moment to all those who came forward to take part in the trials during this uncertain time, to help in the assessment of the vaccine."

Filming took place at the Sheldonian on 2-3 December, with strict observation of the social distancing rules set out by the government.

The concert will be streamed in full on the Oxford Philharmonic’s YouTube Channel on Friday 18 December at 6:30pm. Classic FM will also support the concert by streaming an exclusive programme on their Facebook page, and will broadcast Joseph’s Carol on air, along with the Hallelujah Chorus. 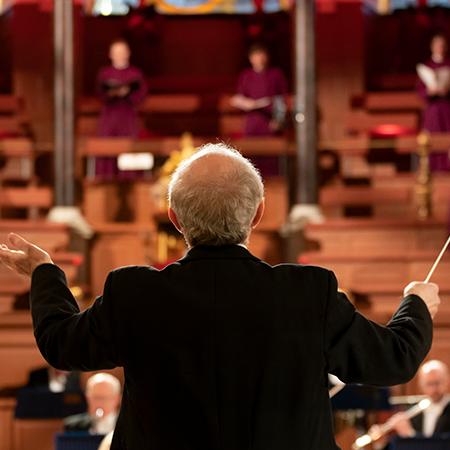