Alex was one of 13 shortlisted competitors, drawn from an extensive long list of organists aged 21 and under from across the world, who performed on the organ of St Patrick's (C of I) Cathedral, Armagh. His 3rd Place prize consists of £200 and promoted recitals at two internationally-acclaimed venues, St Michael’s Cornhill, London, and St Patrick's College, Maynooth; the Bach Prize is a further £200, and a Bach Corner Recital at the 2019 St Albans International Organ Festival.

"It was a huge privilege to compete in this widely-renowned competition, and I am please that the many months of preparation paid off, and that I was able to achieve success against some of the most talented young organists in the world."

“We are all delighted for Alex in his success in the NIIOC. He has been an outstanding organ scholar at Merton for the last three years, and we look forward to his continuing at Merton as Assistant Organist. His performances in Oxford have shown him to be a very exciting musician, and I am thrilled that his playing of music by Bach and Messiaen so impressed the jurors in Northern Ireland.”

Members of the competition jury this year were Catherine Ennis, international organ recitalist, teacher and Director of Music at St Lawrence Jewry in the City of London, and past President of the Royal College of Organists; David Hill, one of the UK's leading choral directors; and Martin Ennis, Senior Lecturer in Music at the Faculty of Music and Fellow and Director of Music at Girton College, Cambridge.

Founded in 2011, the Northern Ireland International Organ Competition offers substantial monetary prizes, prestigious recital opportunities and masterclasses with leading organists across the globe, and aims to discover great young talents and provide a platform to show everyone what they can do. 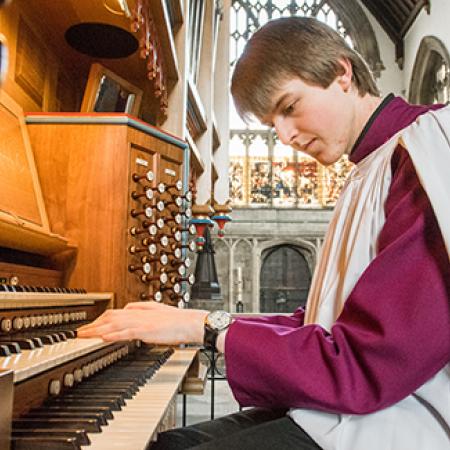