We were delighted to welcome Phyll Opoku-Gyimah, known to many as Lady Phyll, as our keynote speaker for the eighth annual Merton Equality Conversation. Lady Phyll is executive director and co-founder of UK Black Pride, Europe’s largest celebration for African, Asian, Middle Eastern, Latin American and Caribbean-heritage LGBTQ+ people. She is also executive director of Kaleidoscope Trust, the UK’s leading charity advocating for the human rights of LGBTQ+ people worldwide. She was Head of Equality & Learning at the Public and Commercial Services Union (PCS) until June 2019, has sat on the Trades Union Congress race relations committee, and has acted as a Trustee for the LGBTQ+ rights charity Stonewall.

With the ongoing prominence of the Black Lives Matter movement across the world, we were excited to hear from Lady Phyll about the importance of intersectionality and solidarity, the work of building community and imagining new futures, and her experience challenging oppressive colonial legacies while celebrating and campaigning for the rights of LGBTQ+ people around the world for over two decades.

Lady Phyll was in conversation with Ruth Ramsden-Karelse, a DPhil candidate at Merton and founder and co-convener of the Oxford Queer Studies Network. Ruth is the first holder of the Stuart Hall Doctoral Studentship in association with Merton College, the Oxford Research Centre in the Humanities and the Stuart Hall Foundation. Her research considers the world-making work of self-described gays and girls from South African communities from 1950 to the present, with a specific focus on the Kewpie Photographic Collection.

Following the conversation, audience members were able to engage in the discussion by posting their questions and contributions in a Q&A panel. The event was hosted by the Warden of Merton College, Professor Irene Tracey. 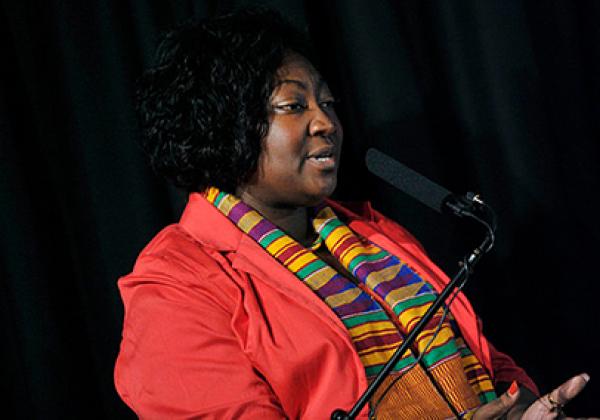