A reflection on Jesus and Lazarus from John 11.1-45

As I write this, there are over 729,000 confirmed cases of a new pandemic sweeping through the world, which has caused at least 34,689 deaths. When you read this, there will be more. Images covering the news feed spread from soaring unemployment rates to plunging markets; from over-flooded hospitals to solitary funerals. Many of us are struggling to cope psychologically, and some also physically. In these times of loss and trial, it is often the absence that is felt most—absence of information, of security, of certainty, and particularly in the current moment, absence of others as we remain mostly isolated. But the most profound absence we sense as we confront images and headlines of people in Italy not only dying alone but being buried alone, too, is the absence of God. Perhaps we can identify quite closely with Martha and Martha in this passage in John’s Gospel as they say to Jesus: ‘Lord, if only you had been here’ (John 11.21, 32).

That place of desolation as we face catastrophic circumstances, and certainly when we face personal and direct loss, is real—maybe necessary. But if we stay there in the absence too long, we forget the heart-stopping, ground-breaking depth of the presence. We forget that more striking in the narrative than our identification with Martha or Mary or the disciples or even Lazarus, is Christ’s identification with us—Christ’s presence with us as he experiences the absence of his friend. We forget that Jesus wept (v35). 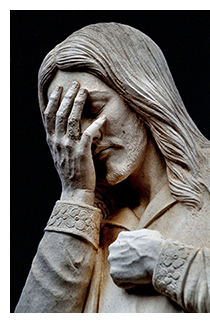 In the logic of John’s telling of this story, Jesus’ weeping and being overcome by emotion doesn’t really make any sense. When he heard of Lazarus’ illness, he responds by saying that ‘this illness is not unto death’ (v4) and follows with ‘our friend Lazarus has fallen asleep, but I go to awake him out of sleep’ (v11). He tells Martha that her brother will rise again (v23). He even says to the disciples, ‘Lazarus is dead, and for your sake I am glad that I was not there, so that you may believe’, which can be translated as the astonishing, ‘Lazarus is dead, and I rejoice … ’ (vv14–15). For Jesus to then be ‘deeply moved in spirit and troubled’ (v33) and to weep at the tomb of Lazarus, having already stated that Lazarus would live again, makes no sense at all. The word used for the phrase that Jesus was deeply moved in spirit is that for the snorting of a horse! At this point Jesus has moved from calm resolve and assurance of Lazarus’ resurrection to being a bit of a blubbing mess. What are we to make of this?

Some have argued that Jesus was moved in a negative way and came to weep at the people’s misunderstanding of death and/or lack of faith. They thought death was the end, so ‘when Jesus saw her weeping, and the Jews who came with her also weeping, he was greatly disturbed in spirit and deeply moved’ because they could not see the fullness of the truth. In fact, the phrase ‘deeply moved’ (the horse snort!) was typically used to denote anger. This must explain, they say, why Jesus was moved and wept. He made clear already there was a happy ending coming, surely grief and sorrow could not be the source of these tears.

But the obvious reading of the narrative, particularly as Jesus is not only a blubbing, horse-snorting muddle when he sees others weeping, but weeps himself when he goes to the place where Lazarus is laid, and was greatly disturbed again when he came to the tomb (v38), is that, regardless of the happy ending, Christ was moved by his grief as he tasted the absence of his beloved friend. (Plus, I for one find it difficult to imagine Christ getting angry at a group of mourners to the point of tears because they hadn’t fact checked their views about death and the afterlife!)

There is something very beautiful and moving here about suffering and grieving, and about rejoicing, too. The fact that Jesus knew that rejoicing was coming did not arrest his tears or keep him from experiencing sorrow. Jesus’ resurrection life, remember, is not just about some distant, far-off future, but the now: ‘I am the resurrection and the life’, he tells Martha, not ‘I will be the resurrection and the life’. And in the ‘now’ of that moment, Lazarus was dead. Lazarus was not pre-resurrected, or ante-life. He was dead, extinct, gone. And that death is real. The pain and grief, the anguish of that ‘now’ is not to be glossed over. And here we see not absence, but God’s presence in Christ, that life everlasting, sitting with us in the real—in the world we live and lose and die in, in all its beauty and brokenness—sanctifying it with love and compassion.

As the world lives out its Lenten fast from all normalcy and stability and cries out, ‘Lord, if you had been here’, we are, for a time, kept from meeting together and receiving Christ’s presence in the sacrament and one another, but we cannot lose sight of Christ’s presence with us in the faces of all who weep. 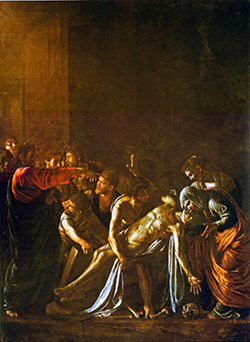 Almighty God, our heavenly Father, whose Son blessed by his presence the home of Lazarus and Mary and Martha in Bethany, grant that, like Martha, we may serve Christ faithfully in the person of our brothers and sisters; and that, like Mary, we may feed on his Word and grow in his love and grace; and that, like Lazarus, we may be brought forth from death to new life in him; through the same Jesus Christ our Lord, who lives and reigns with you and the Holy Spirit, one God, for ever and ever. Amen.