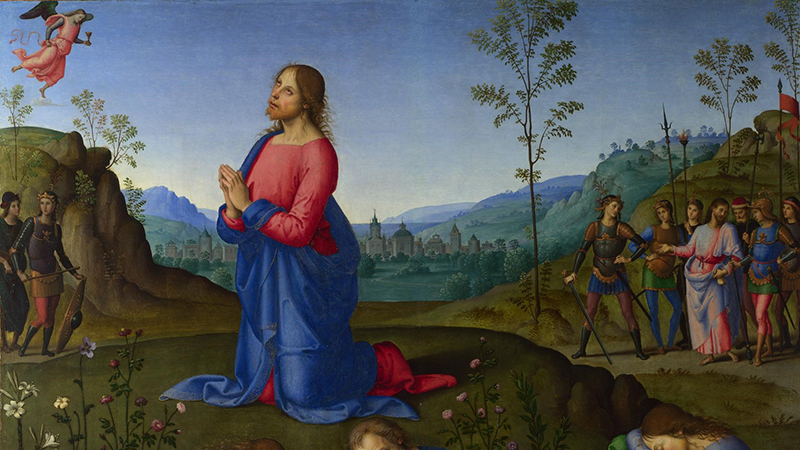 Gabriel Jackson, The Passion of Our Lord Jesus Christ
(listen on Apple Music or Spotify)
libretto compiled by Simon Jones

Then cometh Jesus with them unto a place called Gethsemane, and saith unto the disciples, Sit ye here, while I go and pray yonder. (Matthew 26.36)

Such surge of black wings saw I never homing
Fast from a winter day’s pale-gilt entombing
Nor can the continent’s entire woodland house them.
So many throats of known and unknown runnels
Shooting from thorny cliffs or poured through tunnels
I never heard. Such rainstorm to arouse them
We in these parts yet bore not in such torrents,
Nor warring winds enraged to abhorrence;
The sun was laughed to scorn, his god-head pelted
With sharp bones wrenched from sylvan nature; flamed then
A lightning such, all other lightning (tamed then)
Might be as honey or kind balms slow-melted.
Then this sad evening, this echo of existence,
And what was near driven to enormous distance.

While he yet spake, lo, Judas, one of the twelve, came, and with him a great multitude with swords and staves, from the chief priests and elders of the people. (Matthew 26.47)

– I am only the phrase
Of an unknown musician;
By a gentle voice spoken
I stole forth and met you
In halcyon days.
Yet, frail as I am, you yourself shall be broken
Before we are parted; I have but one mission:
Till death to beset you.

Now he that betrayed him gave them a sign, saying, Whomsoever I shall kiss, that same is he: hold him fast.
And forthwith he came to Jesus, and said, Hail, master; and kissed him. (Matthew 26.48-49)

– You phantoms, pursue me,
Be upon me, amaze me,
Though nigh all your presence
With sorrow enchant me,
With sorrow renew me!
Songless and gleamless I near no new pleasance,
In subtle returnings of ecstasy raise me,
To my winding-sheet haunt me!

Yesterday’s reflection discussed the radically inclusive identity of the Christian community through Eucharist and footwashing. In the upper room, we are made one. But the night of the Last Supper, what we call Maundy Thursday, did not end on such a note. As Judas earlier during the Supper ‘after receiving the morsel … immediately went out; and it was night’ (John 13:30), so Jesus and the rest of his disciples leave the upper room and enter the night. And we begin to see the turn toward darkness that comes in the second half of Holy Week. From rejoicing on Palm Sunday, to the anointing at Bethany, to the establishment of the community of Christ, the Church, in union and equity at the table, and then—into the night: to abandonment, utter loneliness, fear, betrayal, suffering and death. Here we begin to ‘celebrate’ and recall not only our union but our dispersion, our breaking apart, our dissolution: ‘Then all the disciples deserted him and fled’ (Matthew 26:56). We are called into unity as one body in the Last Supper and Footwashing, but this comes through injury, through brokenness and division, through dispersion and rejection and fleeing and regret, and even through betrayal.

By the end of this night it all comes to an end: No hope is in sight, no plan, no victory, only doom and despair. And everyone flees. Everyone abandons Christ. Everyone scatters.

Then this sad evening, this echo of existence,
And what was near driven to enormous distance.

In Holy Week we seek to journey along with Jesus through the last week of his life. And on Maundy Thursday we sit in the lonely emptiness of the Garden of Gethsemane and the shame of his trial, on Good Friday with the brokenness of the cross, Holy Saturday in the despair of the grave. And we must go through this to reach the joy of Easter morning.

At the end of the liturgy of Maundy Thursday we enact this vividly. A ‘garden’ is prepared beforehand on an ‘altar of repose’ in the church and after the Eucharist is celebrated bread that was consecrated is ‘reposed’ on that altar among the greenery and candles of the prepared garden. The people then kneel or sit before the altar in that ‘garden’ to watch and pray with Christ as he had asked his disciples to do in Gethsemane. The church is in complete silence and it is a sober and moving time—one of my favourites in the Church’s year.

We continue to identify with the disciples as they become deserters in their fear. We sit and watch for a while in the church before the Altar of Repose, but only for a while, typically until about midnight, before we extinguish all the candles in the church except the one that burns on the altar marking Christ’s presence, and we desert him. Perhaps we identify closely at times with Judas as well, betraying with the sweet tenderness of a kiss, or going through the desolation Blunden expresses so eloquently: ‘Songless and gleamless I hear no new pleasance’. But wherever we find ourselves in the story, we run out ‘into the night’ and ‘what was near [is] driven to enormous distance’.

Our inability to gather together this year perhaps makes this vivid participation even more striking. This year we watch with Christ in the garden alone, in isolation, as a dispersed community—driven into that distance in quite a literal sense.

But this year, maybe more than others, we can identify with the deep loneliness and isolation of Jesus in the garden. All four Gospels speak of Christ’s time in the Garden leading to his betrayal and arrest. In Matthew’s account, Jesus tells his disciples that his ‘soul is sorrowful, even unto death’, and asks them to remain and keep awake with him (Matthew 26:38). He prays three times that, if possible, the cup of suffering that he was to drink be taken from him, but ends each prayer asking that God’s will be done. The disciples, of course, do not stay awake and are awoken by Christ to meet the band of soldiers coming to carry Jesus away. Mark’s is essentially the same as Matthew’s (Mark 14:32–42). Luke’s account, as we have it, mentions an angel coming to strengthen him as his sweat falls like drops of blood to the ground (Luke 22:43–44), though some manuscripts lack these two verses. And John’s Gospel mentions the soldiers falling down to the ground at the power of Christ’s words, ‘I am he’ when they ask for Jesus. 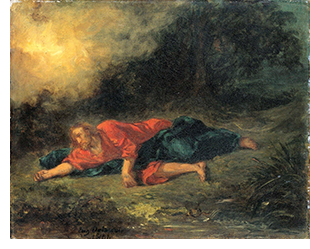 In each account Christ’s isolation from the others, the intensity of his prayer, and his own active participation in the isolation are emphasised. The disciples fall asleep and eventually come to the point of scattering and desertion, but before then, Jesus is active in his isolation. He goes a bit further into the garden by himself to pray intentionally, and he surrenders his desire and will to the Father in the words, ‘not my will, but yours be done’, in a way that parallels his agonising words on the cross, ‘Father, into your hands I commend my spirit’ (Luke 23:46) as he, again, actively, not passively, gives up his life and breathes his last. Christ assertively lives out the process that brings us to unity, hope, and salvation, and it is a process through darkness, isolation, loneliness, and despair.

But the point of despair is not the end because the hope of salvation has already been gifted to the disciples—already it is granted to us. The scattering and desertion and agony of Gethsemane cannot undo the unity of the Upper Room. Instead, it shows us something remarkable about the glorious hope that we have in Christ. Already in the Upper Room Christ’s resurrection life is present—Easter is made present already in the mystery of the Supper, as Christ gifts to the disciples in mystery, in sacrament, a foretaste of his death and the hope of resurrection. Christ’s presence to us is on offer, is made real, in the mundane and the ordinary—in bread and wine, in a meal with friends; and Christ’s presence is made real to us and is with us as that ordinary and mundane sustenance of life is broken: ‘And he took bread … he broke it and gave it to them, saying, This is my body, given for you’ (Luke 22:19), Christ says.

Christ is present, he shows up, at the table, in the body’s brokenness, in that God-forsaken desert of a garden, and ultimately in the suffering of the cross and the darkness of the grave. And that presence is not one that simply shows up in the midst of the empty and dark places of this life, it is one that refuses to leave us there; one that moves us all—through the brokenness, scattering, desertion, isolation, and fear—toward the light and hope Easter’s new life. At times we have to sit a while in the garden, sometimes maybe we are even in times that feel like the grave, but all along knowing that Christ our salvation sat there, too, and meets us there now to raise us to glory in new, resurrection life.

from the high priestly, or farewell, prayer of Jesus: