Holy Saturday: The End and the Beginning 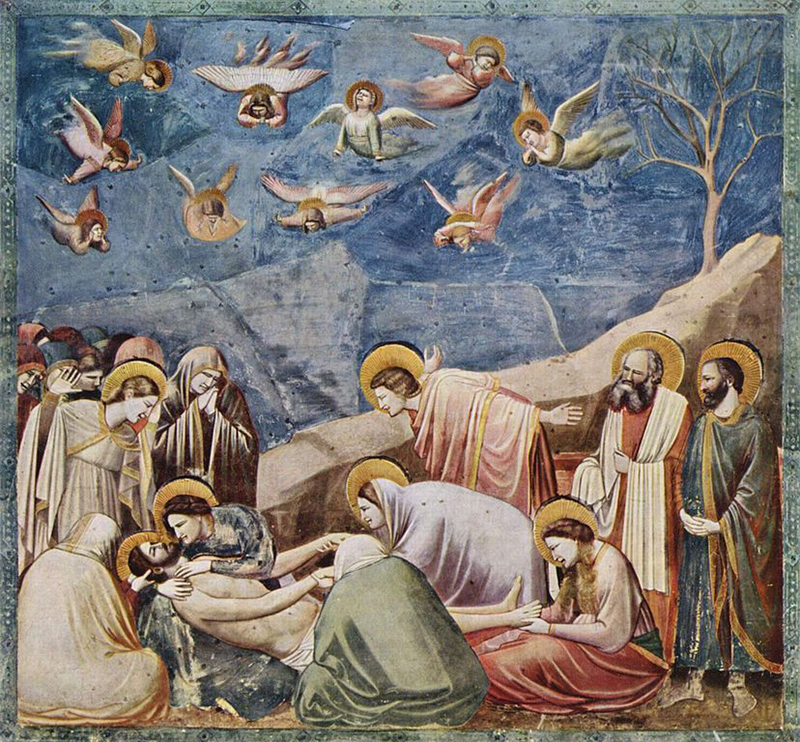 Gabriel Jackson, The Passion of Our Lord Jesus Christ
(listen on Apple Music or Spotify)
libretto compiled by Simon Jones

What we call the beginning is often the end
And to make an end is to make a beginning.
The end is where we start from. And every phrase
And sentence that is right (where every word is at home,
Taking its place to support the others,
The word neither diffident nor ostentatious,
An easy commerce of the old and the new,
The common word exact without vulgarity,
The formal word precise but not pedantic,
The complete consort dancing together)
Every phrase and every sentence is an end and a beginning,
Every poem an epitaph. And any action
Is a step to the block, to the fire, down the sea’s throat
Or to an illegible stone: and that is where we start.
We die with the dying:
See, they depart, and we go with them.
We are born with the dead:
See, they return, and bring us with them.
The moment of the rose and the moment of the yew-tree
Are of equal duration. A people without history
Is not redeemed from time, for history is a pattern
Of timeless moments. So, while the light fails
On a winter’s afternoon, in a secluded chapel
History is now and England.

We shall not cease from exploration
And the end of all our exploring
Will be to arrive where we started
And know the place for the first time.
Through the unknown, unremembered gate
When the last of earth left to discover
Is that which was the beginning;
At the source of the longest river
The voice of the hidden waterfall
And the children in the apple-tree
Not known, because not looked for
But heard, half-heard, in the stillness
Between two waves of the sea.
Quick now, here, now, always—
A condition of complete simplicity
(Costing not less than everything)
And all shall be well and
All manner of thing shall be well
When the tongues of flame are in-folded
Into the crowned knot of fire
And the fire and the rose are one.

None of the gospels describes the events of Holy Saturday, the day which separates Christ’s crucifixion and resurrection. It is the Sabbath, a day of rest. According to St Luke, ‘On the Sabbath they rested according to the commandment’ (Luke 23.56b). But for the disciples, those who shared the Last Supper with Jesus; those who forsook him and fled; Peter who denied him; and his mother, Mary, John the Beloved, and the others who had witnessed his public humiliation and brutal death, their minds could hardly have been at rest on this in-between day. Fear of reprisal for having associated with him, anxiety about what they had left behind and what the future might hold for them, self-doubt, embarrassment, exhaustion and, of course, grief, the weight and depth of terrible grief, filled their minds that longed for rest.

Liturgically, Holy Saturday is also a non-day. There is no special liturgy to participate in and, even in these increasingly hard days of social isolation, no distinctive act of worship to reflect upon or enter imaginatively into. The day is empty. In compiling the libretto for Gabriel Jackson’s remarkable setting of the Passion, which has sustained and energised us throughout this Week of Weeks, it was important not to leave Christ hanging on the cross, and equally important for the final movement not to tell of the resurrection. Rather, to end on a note which embodies the powerfully mixed emotions of this day of unrest while, at the same time, leaving the listener with a whiff of Easter in the air.

We were extremely fortunate to be granted permission by TS Eliot’s estate for Gabriel to set this passage from ‘Little Gidding’, one of his Four Quartets. Eliot came to Merton as a graduate student in 1914, having escaped from Germany, where he had been studying, at the outbreak of the First World War. Anxiety about what he had left behind, both in Germany and back at home in the States, and fear for what lay in the future, were undoubtedly at the forefront of his mind when he arrived at Merton. The same was probably true when he wrote ‘Little Gidding’, published in the midst of the Second World War in September 1942. From the perspective of conflict, turmoil, bloodshed and death, what Eliot offers us here is not a reflection on the resurrection, but rich and evocative words that speak with power and resonance into Holy Week and, most especially, this Holy Week.

It is written by one who believed that ‘the drawing of this Love and the voice of this Calling’ are the love and calling of the crucified and risen one, a love and a calling offered to the whole of humanity in every age. This belief leads him to quote the famous words of Mother Julian of Norwich (1342-1416), ‘And all shall be well, and all manner of thing shall be well’.

During this time of pandemic and international emergency, it’s very important for us not to hear Mother Julian’s words as a ‘happily ever after’ fairy-tale ending to the current situation. They are not. They offer hope, the whiff of Easter in the air, but they are not a tea and sympathy response to the suffering and loss which are causing hurt and distress to thousands of people across the globe. Eliot ends his poem with the words ‘The fire and the rose are one’. For me the power of this image lies in the fact that both fire and rose have positive and negative properties. Fire is a source of warmth and light, but it has also the power to destroy. The rose is a flower of incredible beauty, but its thorns can draw blood.

The resurrection of Jesus Christ, which we will celebrate tomorrow, does not obliterate his Good Friday experience. It does not blot out its pain, or its darkness or its God-forsakenness, as it if never happened. It transforms it. If offers a new God-given perspective from which to view it, but it does not erase it. The bruised body of a young Jewish man that was buried in a garden tomb yesterday evening bore the marks of the crown of thorns as well as the nails and the spear. The Easter Candles that will be lit in some homes and a few churches between sundown today and dawn tomorrow will burn with a flame lit from the new fire of Easter; but they will also be pierced with five grains of incense in the shape of a cross, symbolising the wounds of the crucified Christ. ‘The fire and the rose are one’.

At Merton we will not experience the loss of not worshipping together on Easter Day in the same way that other communities will. The College is always closed over the Easter weekend. Each year we have to wait, sometimes several weeks until term begins, before we can gather to celebrate the resurrection together. This year, for all Christians, the promises of Easter will be as true tomorrow as they always are. Christ will rise with the dawning of the day, and death will be defeated. Nevertheless, we will need to wait an unknown number of weeks before we are able to gather as communities and congregations to celebrate this transforming reality in our lives.

Faced with the imminent outpouring of the life of the Easter within the context of suffering, loss and uncertainty, it’s important for us to spend time contemplating what this means for us on this restless Sabbath and, as Archbishop Justin has suggested, to take some of Holy Saturday with us into our celebration of Easter. Inspired by this final movement of the Jackson Passion, we can do so with the whiff of Easter in the air, sharing the hope of TS Eliot and Mother Julian that, since ‘the fire and the rose are one’, ‘all shall be well, and all manner of thing shall be well’.

Father of death and life,
in whose Son Jesus Christ the fire and the rose are one, be with us as we wait silently outside the tomb:
may the fragrance of tomorrow’s Easter bring comfort and hope
to the pain and uncertainty of today;
through the transforming love of your Son, Jesus Christ, our crucified and risen Lord.