The College's Gardens team, led by Head Gardener Lucille Savin, watch over a total of 167 trees, originating from all around the world. Last week two of these, dawn redwoods (Metasequoia glyptostroboides) which stood beside the TS Eliot Theatre, needed to be removed after becoming unsafe.

Inevitably the trees in Merton's gardens need replacing from time to time; in this instance, it seems that 18 years ago the two trees had compost piled against them, triggering decay at the base. The trees tried to compensate by widening their trunks, but unfortunately the decay took over. Dawn redwoods, a type of deciduous conifer, grow fast but have a softwood heartwood with little resistance to fungal attack.

The good news is that there is one remaining Metasequoia on Chestnut Lawn which Lucille says "looks happy and well". Metasequoia, which can grow to at least 165 feet (50m) in height, were only known from fossil records, until a few were discovered in the Szechuan province of China in 1944. Luckily Chinese botanists in collaboration with Harvard University worked to collect their seeds and distribute these to botanical gardens and collectors around the world, allowing us to experience this sole living species in the Metasequoia genus. They have become known as ‘living fossils’; not bad for something thought to be extinct for 3-5 million years!

In place of the felled dawn redwoods, Lucille and her team will be planting a species of hickory, Carya illinoinensis, native to northern Mexico and the southern United States where it is widely cultivated for its seed - the pecan nut. The hickory has a broader crown than the dawn redwood, and Lucille says this will eventually impact on the view of Merton from Christ Church Meadow. The choice of replacement tree was made in collaboration with the local authority's Tree Officer, as the College is in a conservation area. The new trees will require watering for their first 2-3 years, and formative pruning to ensure an open branch structure as they grow. 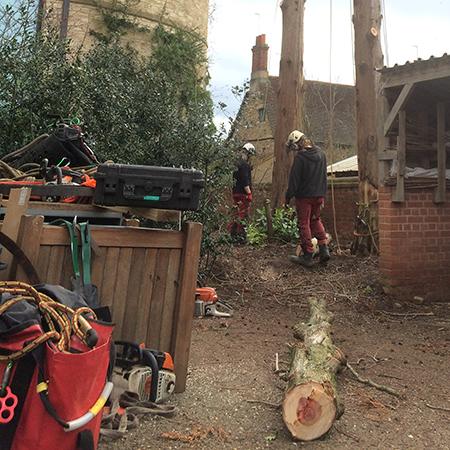