It is with great sadness that the College announces the death of Sir Rex Richards FRS, who died on 15 July at the age of 96. Sir Rex served as Warden of the College from 1969 to 1984 and as Vice-Chancellor of the University from 1977 to 1981. He led the College at a flourishing time with wisdom, kindness and distinction. As he put it in an interview at the time of his retirement, his aim was "to work towards an atmosphere of high standards of research and scholarship among fellows and graduates and high academic standards among undergraduates, and to help create an air of informality which is important for good academic work".

After study, research and teaching at Magdalen College, Lincoln College and Harvard University, Sir Rex was Dr Lee's Professor of Chemistry and a Fellow of Exeter College from 1964 to 1969. His research on the chemical applications of nuclear magnetic resonance won him honorary degrees from thirteen universities, the Davy Medal and Royal Medal of the Royal Society, the Corday-Morgan Medal of the Chemical Society, the President’s Medal of the Society of Chemical Industry and the Medal of Honour of the Rheinische Friedrich-Wilhelms Universität, Bonn.

After his Wardenship, Sir Rex combined his academic and artistic interests in a wide range of activities. He was Director of the Leverhulme Trust, President of the Royal Society of Chemistry, Chancellor of Exeter University and Chairman of the Henry Moore Foundation and of the National Gallery Trust. He also served as a trustee of many other scientific and artistic institutions, including the CIBA Foundation and the Tate Gallery. 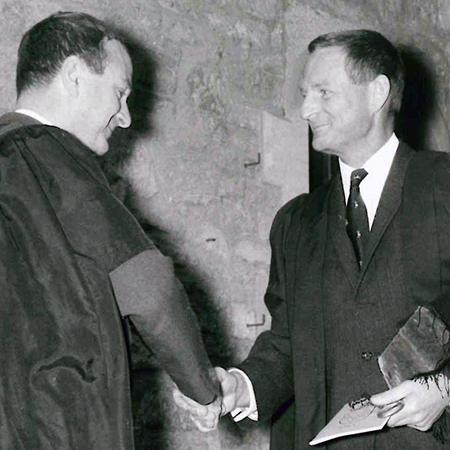