Amongst the many ancient books and manuscripts in the collection of Merton's library are 23 Hebrew books and six manuscripts that the Merton Fellow Robert Huntington (1637-1701) bequeathed to the College in 1673. One of these, the Merton Zohar manuscript, together with the texts bound with it, has recently been conserved and digitised thanks to a generous gift given by Mertonian Neil R Brown (2002) and Eric Braverman in honour of Ned and Hattie Weiss. The manuscript and texts are now available online via Digital Bodleian.

The Merton Zohar stands out for a number of reasons. The manuscript is bound with two printed texts and has been shelved in the library alongside the printed books for centuries. The first reference to this curious composite volume is found in a 17th-century handwritten catalogue that lists Huntington’s Oriental treasures that he had sent back home to Oxford from Damascus and Aleppo. ‘Liber Zohar MS. impf’ appears there along with ‘Toledoth Isaac’. Indeed, these two items were bound together in the 17th century, perhaps due to their common provenance or assumed textual affinity (both are, broadly speaking, commentaries on the Pentateuch). A third item is also included in the volume but the reason for doing this remains unknown. The unassuming calfskin binding is a type commonly found in college libraries and suggests that the volume was bound in Oxford.

And yet this specific manuscript of Zohar is very special. While the Zohar is essentially a commentary on the Torah, it is more like a collection of abundant literary and theological sources. It includes homiletic material, midrashic passages as well as parables and beautifully embeds these with kabbalistic theosophy. Therefore it is not surprising that the study of the Book of Zohar (meaning ‘Splendour’ in Hebrew), has been long associated with mysticism or esotericism, and the scholarly debates around its nature and origin are still ongoing. The opening words of Merton’s manuscript reads ‘The Book of Zohar by rabbi Simeon bar Yohai’ — i.e. the rabbi to whom its authorship has been traditionally attributed which would date it, as a consequence, to the second century. It seems though that an important corpus of Zoharic literature was actually composed and edited by a 13th century Castilian kabbalist, namely rabbi Moses ben Shem Tov de Leon (ca. 1240-1305). These Hebrew and Aramaic texts that form the canon of Jewish mystical tradition spread in the Jewish communities, both in the East and West.

Editors and printers of the first edition of the Zohar were challenged by the wealth of the Zoharic material, not least by the number of manuscripts they came across (almost whole libraries in themselves) and consequently made some critical, arguably, even dramatic choices, bringing forth what is nowadays usually considered to be the Zohar.

However, individual manuscripts tell their own stories and that is why it is particularly important to understand where a manuscript—both as a physical object and textual unit—comes from, and how to date it. In the last decades a few prominent scholars of Hebrew manuscripts have made attempts to study the Merton’s Zohar and discuss it in their academic publications. Palaeographic analysis reveals that the manuscript was written in the Sephardi cultural realm, as demonstrated by its Sephardi semi-cursive script (perhaps more specifically, Sephardi-Byzantine semi-cursive script). As an example, similar script was used in another Hebrew manuscript that dates from 1504 and was produced in North-Africa. Therefore, we can tentatively suggest that the Merton manuscript comes from North Africa. Furthermore, it is written on a type of paper that was produced between 1499 and 1502 and, even if this paper was used a little later for writing the Zohar (say, early to mid-16th century), the manuscript remains early evidence of a Zoharic work.

From the colophon on folio 111v we learn that the manuscript was copied by a scribe called Shabtai. Perhaps not surprisingly for a mystical text, the colophon is presented in the form of a riddle. Nothing more is known of Shabtai, and until now there has been no other scribe with this name found in any other contemporary Sephardi manuscript.

It is possible that Shabtai copied the manuscript for his own use; it seems that he was not able (or did not need) to plan or prepare its layout in advance, nor edit the order of textual units. There are several later marginal corrections and deletions though. It is precisely this organic, unedited format that makes this manuscript so valuable and telling in terms of the formation of the Zoharic canon. Parts of the manuscript represent textual traditions that have never appeared in print in any of the several editions of the Zohar that had become such a popular book by the late 16th and 17th centuries.

Today, once again there is an enormous interest in esoteric literature and research relating to Jewish mysticism, which attracts an ever increasing number of scholars and students. Cataloguing and digitising kabbalistic manuscripts plays a major role in facilitating their scholarly study. Professor Ronit Meroz (Tel Aviv University) has dedicated an entire chapter to the Merton Zohar manuscript in her recent book for which she was awarded in May 2020 a prestigious book prize in Israel (by Yad Ben Zvi Institute). It is to be hoped, that now that the manuscript is available to all on Digital Bodleian—in its entire splendour—it will inspire further such first-class research. 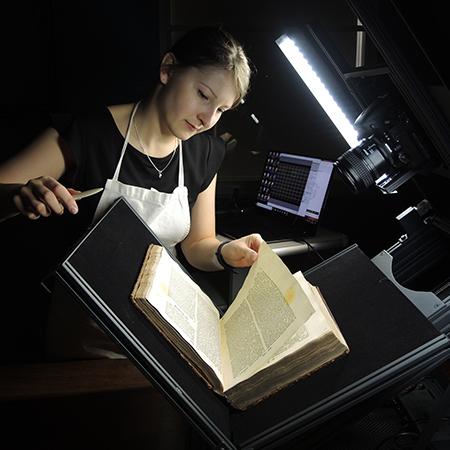