History DPhil student Eamonn O'Keeffe appears on this Sunday's edition of Songs of Praise on BBC One, talking to presenter Claire McCollum about a fascinating diary entry that is complicating assumptions about British attitudes to homosexuality in the early 19th century.

Eamonn's discovery, made in Wakefield Library whilst researching British military musicians during the Napoleonic Wars, was first featured by BBC News and on BBC Radio 4's Today programme back in February. Eamonn readily admits he identified the diary passage "by mistake":

"Returning by train from a conference in Leeds, I decided to stop in Wakefield on a whim to view the diaries of tenant farmer, Matthew Tomlinson, having noticed colourful quotations from them in a book by Ellen Gibson Wilson on the Yorkshire election of 1807."

Tomlinson was an observant but ecumenical Christian who wrote extensively on faith, love, death, and the political and economic affairs of his day. His journals offer manifold insights into life at that time, most striking of which is a passage from his 1810 diary that offers a sympathetic view of homosexuality from a religious perspective.

"As it turned out, the diaries had little to say about military music – Tomlinson was disdainful of patriotic pageantry – but his reflections on homosexuality, which I spotted by chance while paging through the journals, stood out to me as striking and unusual for the time."

Reflecting on the recent execution of a naval surgeon for 'sodomy', Tomlinson postulated that homosexuality was a “natural” passion undeserving of the death penalty. Having been “informed” by others that same-sex desire was experienced by some males from a young age, the farmer struggled to understand how a just Creator could countenance such severe punishment for an apparently God-given trait:

"It must seem strange indeed that God Almighty shou'd make a being, with such a nature; or such a defect in nature; and at the same time make a decree that if that being whome he had formed, shou'd at any time follow the dictates of that Nature with which he was formed he shou'd be punished with death."

Eamonn says that "Tomlinson’s meditations ... provide rare and historically valuable insight into the efforts of an ordinary person of faith to grapple with questions of sexual ethics more than two centuries ago." He has written an article analysing the diary passage, which is forthcoming in the journal Historical Research.

Eamonn hopes that the find will serve as a reminder of the serendipity inherent in historical research, adding:

"Sometimes the most interesting and important discoveries are the ones you weren’t even looking for!" 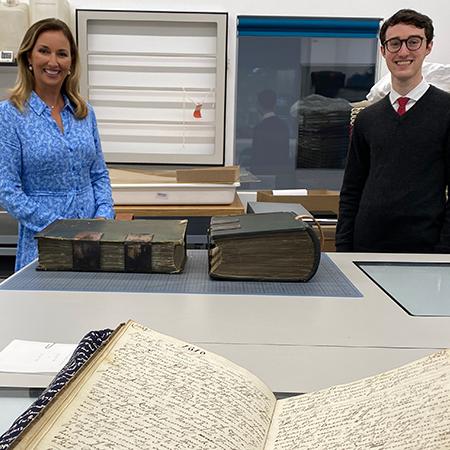