Two Merton second-year undergraduates and an alumnus, together with a Jesus College student, have won the 11th International Roman Law Moot Court Competition.

The mooters learned about the complexities of two legal proceedings in Roman law; rei vindicatio - a legal action by which the plaintiff demands that the defendant return a thing that belongs to the plaintiff - and actio de incendio, ruina, naufragio, rate, nave expugnate - an action arising from aggravated theft involving fire, collapse of a house, shipwreck, or the capture of a boat or ship.

This year's competition was organized by Dr Benjamin Spagnolo, a Fellow of Trinity College, Cambridge, and Professor Jean-François Gerkens of the University of Liège; it was held in the Belgian cities of Eupen and Liège, which enabled the participants to also enjoy a day out to the German-speaking Community's parliament in Eupen, and to a chocolate factory. 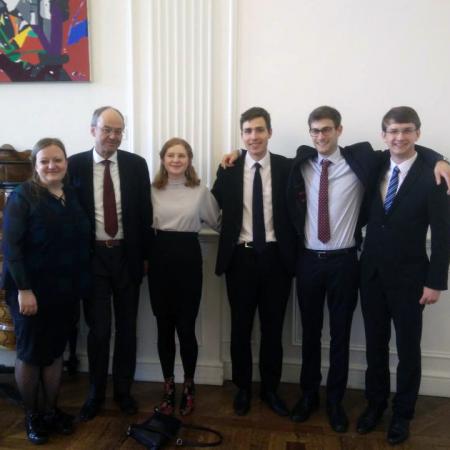