History is made as College Choir sing at St Peter's, Rome

On Monday 13 March, the Choir of Merton College sang the first ever Anglican Evensong to be celebrated at the altar of the Chair of St Peter in St Peter’s Basilica at the Vatican.

"To be present at, and to participate in, the first ever Anglican liturgy to be celebrated at St Peter's was a huge privilege. The College Choir enriched the liturgy with music of the highest standard, chosen to reflect the breadth of the Anglican choral tradition, and including the set of Responses from the Merton Choirbook, composed to celebrate the College's 750th anniversary in 2014. Merton also provided the stewards for the service, from the pilgrimage group present in Rome this week, and our Verger, Leah Stead, verged the processions, the readers and the preacher.

"The Reed Foundation enabled the College's participation in this historic occasion, which was, for me, a great sign of hope, revealing the strong bonds of affection which already exist between Anglicans and Roman Catholics, and encouraging those present to look for new ways in which the work of ecumenism may be taken forward in the future. The feelings of those present were summed up in the refrain of the final hymn, sung as we processed together to the tomb of St Gregory, the Pope who sent St Augustine to England: 'one Church, one faith, one Lord'."

The Warden, Sir Martin Taylor, who was present at the service, added:

"I was immensely proud of our talented young students who performed in St Peter's on Monday. The programme of music was extremely well-balanced, especially in its inclusion of works by William Byrd both in Latin and in English, which the Choir sang to perfection. The moment when our choir, led out by our Verger, processed through the majestic space of the Basilica truly sent a tingle down the spine.

"It does not fall to many institutions to make history, but on Monday Merton did so, and I felt humbled that, as the 50th Warden and the first Catholic to hold the position since the Reformation, I was able to be present at such a momentous confluence of traditions."

Oliver Pateman, one of the group of Merton students who are currently on a pilgrimage in Rome, spoke about the experience:

"This has been a long-overdue chance for reflection and discernment at the end of a long and busy term. In particular, the opportunity to hear the choir sing the first Evensong at St Peter's was a truly astonishing, history-making experience."

Another member of the group, Mary Boyle, added:

"The pilgrimage has been a peaceful and healing experience after a very busy term. As the College's former Catholic rep, I was especially moved by hearing the choir sing Evensong at St Peter's. We are all privileged to have been able to participate in such a wonderful occasion." 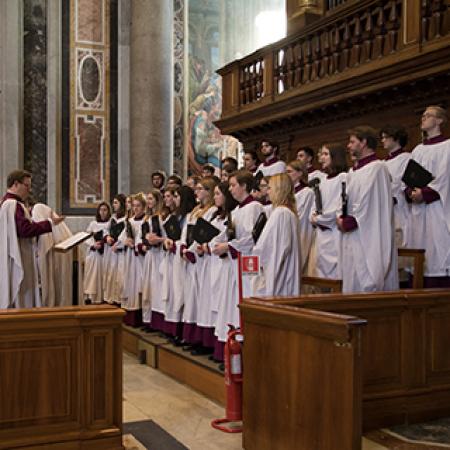