A Companion to the Archaeology of Early Greece and the Mediterranean, co-edited by Merton's Irene S Lemos, Professor of Classical Archaeology, and one of her former students, Antonios Kotsonas, has been named as one of the 2020 Choice Outstanding Academic Titles.

"I am delighted that the Companion to the Archaeology of Early Greece and the Mediterranean has received the academic recognition by Choice. The Companion synthesises and presents in detail recent and exciting research on a period which is insufficiently understood. We hope that the award will make the field more accessible and will inspire new research on this exciting period of Mediterranean archaeology. The two volumes of the Companion are available in the college's library."

Choice is a publishing unit of the Association of College and Research Libraries, a division of the American Library Association; their monthly magazine, Choice, includes 350 new reviews, a bibliographic essay, and news of upcoming titles, and aims to help librarians curate and deliver better sources. Every year in the January issue, Choice publishes a list of Outstanding Academic Titles that were reviewed during the previous calendar year. This prestigious list reflects the best in scholarly titles reviewed by the magazine, and brings with it the extraordinary recognition of the academic library community.

The Companion, published in 2020, offers an original and inclusive review of two periods in Greek Archaeology, which are typically treated separately – the Late Bronze Age and the Early Iron Age. It presents in-depth exploration of the society and the material culture of Greece and the Mediterranean, from the 14th to the early 7th centuries BC. Choice's review described it as 'a valuable contribution, bridging the traditional scholarly gap between the prehistoric and classical periods.'

Professor Lemos's research area is the archaeology of Early Greece. Since 2003, she has been the Director of the excavations and publications of finds at the site of Lefkandi, on the island of Euboea (Greece). She has published extensively in the area of the Late Bronze Age and Early Iron Age archaeology of Greece and the Mediterranean.

Her co-editor, Antonios Kotsonas, is Associate Professor of Mediterranean History and Archaeology at New York University's Institute for the Study of the Ancient World. 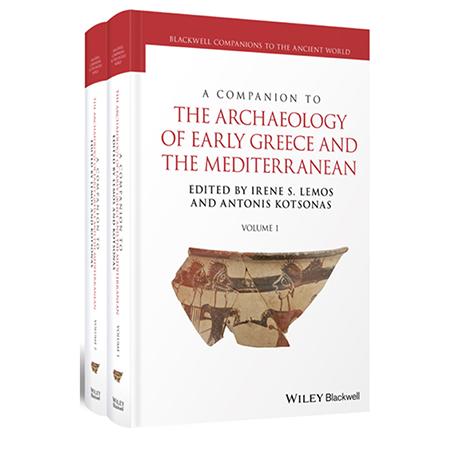