Merton Tutor in Physics Alex Schekochihin, Professor of Theoretical Physics at the University of Oxford, has been appointed Simons Investigator in Astrophysics by The Simons Foundation, New York. Simons Investigators are outstanding theoretical scientists in Mathematics, Physics, Astrophysics or Computer Science, who receive a stable base of research support from the Foundation, enabling them to undertake the long-term study of fundamental questions, establishing creative new research directions while providing leadership to the field and effectively mentoring junior scientists.

"Academics’ greatest privilege is to be able to help create around us an environment of intellectual excellence – and in this environment, to get to work with people who are smarter and more dynamic than us (and, these days, usually younger). I am very grateful to the Simons Foundation both for the honour and for the grant that is perfectly designed to enable just that – supporting such people, to whom I owe much of what the Foundation presumably thought was deserving of that honour."

Professor Schekochihin is interested in the fundamental nature and practical implications of turbulence in plasmas. His main contributions to date have concerned the physics of turbulent dynamo (believed responsible for much of the observed cosmic magnetism), the free-energy cascade and the interplay between microscale instabilities and mesoscale dynamics in astrophysical plasmas from galaxy clusters to solar wind, and mechanisms for ‘phase transitions’ between low- and high-transport states in fusion devices. Recently, he proposed a theory of ‘fluidisation’ of collisionless plasma turbulence, owing to suppression of Landau damping by stochastic echoes. This has led to his ongoing interest in the general problem of turbulent relaxation and universal equilibria in collisionless plasmas.

Professor Schekochihin is co-Editor-in-Chief of the Journal of Plasma Physics. For his research in laboratory and astrophysical plasmas he has received the Cecilia Payne-Gaposchkin Medal from the Institute of Physics, and the John Dawson Award from the American Physical Society, both in 2019. 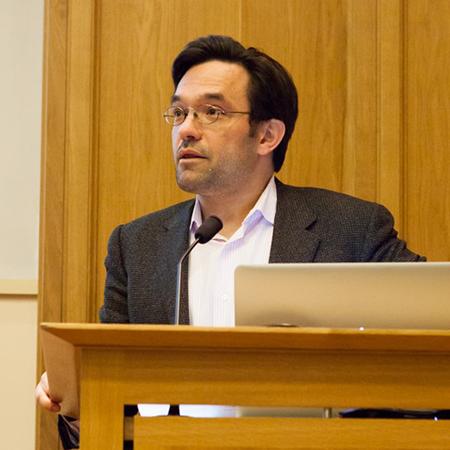