Merton in the City

The 40 Years Series, with Professor Fiona Murray CBE (1986), Associate Dean for Innovation and Inclusion at the MIT Sloan School of Management, and The Rt Hon Elizabeth Truss MP (1993), Secretary of State for International Trade and President of the Board of Trade and Minister for Women and Equalities.

Professor Murray and Liz Truss were in conversation on the United Kingdom’s place in the world now it is outside the European Union – and specifically how entrepreneurial talents can be put to better effect in developing trade in the coming decades. Our two speakers have a multitude of experience in roles which are highly relevant to the development of UK trade and economic development, which brought on a fascinating discussion.

Professor Fiona Murray holds many positions in the business and entrepreneurial world on both sides of the Atlantic. She is Associate Dean of Innovation & Inclusion and William Porter Professor of Entrepreneurship at the MIT Sloan School of Management; and co-director of the MIT Innovation Initiative. Fiona is also an associate of the National Bureau of Economic Research; and last, but of course not least, she serves on the UK Prime Minister’s Council for Science and Technology.

The Rt Hon Liz Truss first entered parliament in 2010 when she was elected as the Conservative MP for South West Norfolk. Liz was a dynamic backbencher, speaking up on topics such as the economy, childcare and maths education, and she has steadfastly climbed the political ladder ever since. She has too many accomplishments to mention, but one we are particularly proud of is that, in 2019, she became the first woman to hold the position of Secretary of State for International Trade. Further to this role, she sits as President of the Board of Trade, and Minister for Women and Equalities.

The event was chaired by Richard Baxter (1983), Chair of the Merton in the City Association Committee.

The discussion was followed by a Q&A session, moderated by the Warden, Professor Irene Tracey. 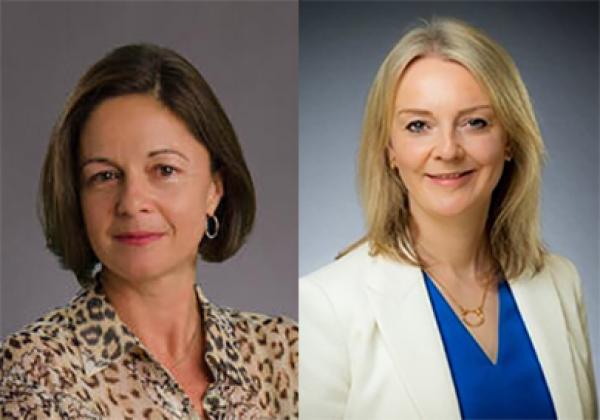